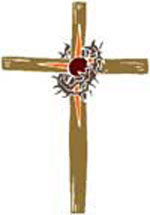 In a certain country many hundreds of years ago the king wondered if all the honour and attention he got from the people was because of his position as king or simply because the people really cared for him. So one day he dressed as a beggar and stole out of the palace, went to the local market and sat down in the main square begging. He had decided to reward anyone who really showed interest in him. Nobody paid any attention to him except, near midday, an old woman came up to him, knelt before him and took out a piece of cloth. In it were some coins and she shared them with the disguised king saying she had been at the city gate which was the best place to beg. He thanked her and asked where she lived and she explained it was in a little hut by the river. Imagine her great astonishment when next morning the king now dressed as the king visited here and rewarded her very generously for her kindness. What the king gave her was out of all proportion to her gift to him.

The gospel today is something like that. For the past few Sundays we have been hearing some parables.  These can be interpreted differently depending on how the hearer responds.  But today’s gospel parable is very clear and leaves no room for wrong interpretation. Jesus is telling us that what we do to the least of others he takes it as done to himself. The core of the story is not so much the fact that we shall be judged by our labours of love but that the king whom we must serve with love takes the form of, and is present in, the least among men and women. How wonderful to serve Jesus if he appears like a royal figure or perhaps as the Pope or a president.  But the story presents the King of the Universe taking the face of a person who is hungry, thirsty, in need of hospitality. And the response is found in the simple ordinary human gestures of giving someone food or drink or a simple welcome.  Sometimes we may have nothing to give people other than to treat them in the way Jesus treats people. Saul on the road to Damascus, on his way to persecute the disciples of Jesus, when falling to the ground because of a light from heaven that surrounded him heard a voice.  It said “Saul, Saul, why are you persecuting me”.  When Saul asked who it was the reply was “I am Jesus and you are persecuting me”. A clear statement that Jesus regards as what we do to others as being done to himself.  Besides, one can easily say ‘I love God’.  There is a very simple test – how do I love my brother and sister, especially the least ones

Today’s gospel is telling us two things among others. Firstly, it must be help in simple things. This we can all do. The things which Jesus picks out: giving a hungry man a meal or a drink or welcoming a stranger, visiting the sick or prisoners are all things which anyone can do. It is not a question of giving away large sums of money, being famous and well known. It is a question of giving simple help to those we meet daily. There never was a parable that opened the way to glory to the simplest people. Secondly, it must be help which is uncalculating. Those in the story who helped did not think they were helping Christ. It was natural, instinctive, an uncalculating act of kindness. Whereas the attitude of the other group was that if they had only known, of course they would have given help.

But Jesus still comes to us in his distressing disguise. The Salvation Army is a Christian denomination. They don’t believe in baptism, the Eucharist or in priesthood.  Yet you hear nobody criticising them. Why?  Because what they do speaks so loudly that no one cares what they believe. They provide soup kitchens for the hungry. They clothe the naked on the streets. They rehabilitate those addicted to drugs or alcohol.  They are there wherever disaster strikes. As far as people are concerned these are the things that count. They are what counts for God as well. Today’s parable makes no mention of people’s beliefs but only of the practical help they gave or did not give to the needy and disadvantaged.

At the end of the Eucharist we hear the words: ‘Go, the Mass is ended’. Go and do what? Surely to be of service to others. Maybe the others, the least are members of my own family, someone close to me – a wayward son, a pregnant unmarried daughter, a drug addict, an unemployed friend in need.

It is not God who sends people to hell – it is we who choose heaven or hell depending on how we treat the least of our brothers and sisters.  The choice is ours and God will respect that.

The Good News we celebrate today, is that we have a king, who unlike the kings or rulers of this world, pays attention to us and helps us not only when we are needy and disadvantaged but especially when we are needy and disadvantaged. The challenge today is to forget our own needs for love and happiness (often mistaken as pleasure) and to reach out in love to make someone happy who may be in greater need.  For whatever we do to the needy children of God, those brothers and sisters of Jesus, above all the least of them, we do to Jesus himself. He says so.

“Lord, help us to love and serve you in all especially those most in need.  Amen.”