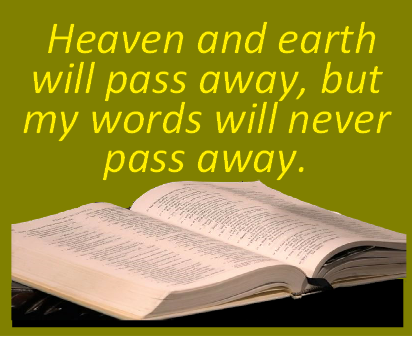 Theme: ‘Heaven and Earth will pass away, but my words will not pass away’ (Mark 13:3)

A middle-aged woman was hurrying home from work on her bingo night out. As she drew near her home she spotted a young man standing at a street corner holding a placard with these rather startling words: ‘THE END OF THE WORLD IS NEAR.’ Approaching him she asked: ‘Are you quite sure the end of the world is near’. ‘Yes, quite sure’, he replied. ‘How near?’ the woman enquired further. ‘Very near,’ said the man. ‘Could you be a bit more precise?’ insisted the woman. ‘This very night, Mam’, he replied. The woman paused a moment to reflect on these ominous words and then, in a voice tinged with anxiety asked: ‘Tell me, son, will it be before or after the bingo’?

We don’t know for sure how or when the world will end. However, reading ‘the signs of the times’, it is quite probable that, unless we radically reduce the current level of our greenhouse gas emissions, we will soon bring about the end of the world as we know it with the extinction not just of human life but of most life forms on the earth. At the Glasgow COP 26 Summit, the British Prime Minister, Boris Johnson, reminded World leaders that we were one minute from midnight on the doomsday clock.

Today’s Scripture readings echo the sombre mood of our times. Both the first reading and the gospel passage allude to the end of the world. In apocalyptic images they warn us of ‘a time of great distress, unparalleled since nations first came into existence’ (Daniel 12:1); a time when ‘the Sun will be darkened, the moon will lose its brightness, and the stars will fall from the sky’ (Mark 13:24-25). While these images are poetic allusions and not to be taken as literal descriptions of events to come, they remind us of the all too real images we see on TV almost every day – images of drought stricken lands, burning continents, melting ice caps, flooding cities, and disappearing islands. And they conjure up a frightening scenario of what lies ahead of us.

However, the message of today’s readings is not one of disaster but rather of hope. The passage from the Book of Daniel assures us that the Archangel Michael will come to the rescue of ‘all those whose names are written in the Book’ (Daniel 12:2), that is, all the faithful of Israel who have persevered in spite of trials and tribulations. It affirms the resurrection of the dead and, in a  beautiful image, states that ‘the learned will shine as brightly as the vault of heaven, and those who have instructed many in virtue, as bright as the stars for all eternity’ (Daniel 12:3).

Mark’s gospel was written at a time of severe persecution in the early Church. Many members of the community in Rome had been arrested and put to death. Some has lost heart and abandoned their faith. In today’s gospel passage, Mark is consoling and strengthening a community threatened with extinction. His message is that those who are faithful need not have no fear. ‘They will see the Son of Man [The risen and glorious Christ] coming in the clouds with great power and glory; then he will send the angels to gather his chosen from the four winds, from the ends of the world to the ends of heaven’ (Mark 13:26-27). They must not falter but to hold fast to the words of Jesus which, no matter what happens, shall never pass away. For them, the world is not heading towards extinction but towards a wonderful transformation into ‘a new earth and a new heaven’ in which they will share in the glorious reign of their Risen Lord.

This message of hope is as relevant today as ever. We inhabit a world where there is much injustice, violence and hatred. Confidence in the progress of human civilization has been dented by the emergence of new conflicts and divisions. In the words of Pope Francis, ‘we live in a world lurching from crisis to crisis and lacking a shared roadmap’ (Fratelli Tutti). The recent Covid pandemic – unfortunately still with us – has shown us just how vulnerable we all are, while the accelerated pace of global warming threatens the very future of life on earth – notwithstanding the ‘blah, blah, blah’ (Greta Thunberg) of world leaders. And yet, as Christians we have an unconquerable hope that looks beyond the tragic circumstances of our times, for it is a hope based ultimately on the resurrection of Jesus and hence a hope for a new life that rises out of the ashes of death and decay. Such a hope is not confined by the limits of what we can achieve by our own efforts. God’s purpose in creation, reaffirmed in the incarnation, and gloriously manifested in the resurrection shall not be defeated. We may not know how or when this completion will happen, but as surely as day follows night, it will happen. Let us say ‘Amen’ to that not just with our lips but with our lives.