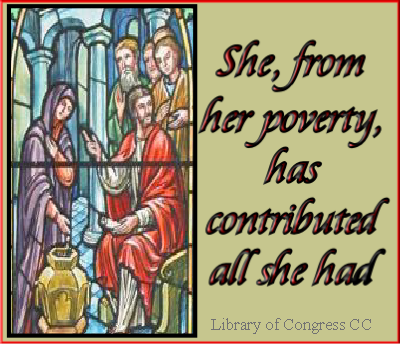 Widows feature prominently in the Bible. Today’s readings showcase two widows as examples of extraordinary generosity. We must remember that, in biblical times, widows were not only poor, but also without any security. They were the most marginal of the marginalised and extremely vulnerable. On losing their husbands, they had lost their only means of livelihood and had to depend totally on charity to survive.

Our reading, from the first Book of Kings, recounts a memorable incident in the life of Elijah, one of the great prophets who lived 900 years before Christ. During a severe famine he enters a foreign town, Sidon (in modern day Lebanon) where he meets a widow gathering sticks. This woman is preparing to cook a final meal for herself and her son before they both expire. Notwithstanding her harrowing circumstances, Elijah asks her for water and some bread, assuring her that she and her son will not starve to death. Trusting his word, despite not being a Jew, she shares her final meal with him. The story has a happy ending as we are told that ‘the jar of meal was not spent nor the jug of oil emptied’ (1Kings 17:16).

In the gospel passage from Mark, we meet another widow also in dire straits. She has just two small coins left in her purse, the equivalent of a penny, about 1% of a labourer’s daily pay. In an act of seemingly reckless generosity she puts both coins into one of the boxes of the Temple treasury. Jesus alone notices her and immortalises her act of utterly self-less giving. He presents her to his disciples as a model of generosity, saying: ‘I tell you solemnly, this poor widow has put more in than all who have contributed to the treasury; for they have put in money they had over, but she from the little she had has put in everything she possessed, all she had to live on’ (Mark 12:43-44).

The discrete unselfconscious action of the widow stands in stark contrast to the self-important posturing of the scribes, who love  ‘to walk about in long robes’  in order to be noticed and ‘greeted obsequiously in the market squares’ (Mark 12:38). Jesus warns his disciples to beware of these hypocrites who, while pretending to be holy men of prayer, ‘swallow the property of widows’ (Mk 12:40). In other words, they use their position as lawyers to exploit vulnerable widows for their own advantage. A more despicable injustice would be hard to imagine!

Taken literally the actions of the widows featured in today’s readings appear reckless and foolish, for they give, not from their abundance, but all the meagre means they have for survival. Yet their extreme generosity illustrates a profound truth about God and about what is important in life. The widows epitomise God’s self-giving love, for it is when we freely give without counting the cost that we are most like God. Brendan Kennelly, the Kerry poet who died recently, has a beautiful poem about the mystery of God’s constant outpouring of himself. I quote a few lines:

‘I give thanks to the giver of images,
The reticent God who goes about his work
Determined to hold on to nothing.
Embarrassed at the prospect of possession
He distributes leaves to the wind
And lets them pitch and leap like boys
Capering out of their skin.
Pictures are thrown behind hedges,
Poems skitter backwards over cliffs….
I do not understand
Such constant evacuation of the heart
Such striving towards emptiness.’

It is Jesus who manifests supremely the Creator God who gives everything away. He does this in his ministry to the poor and marginalised, but above all in his passion and death on the Cross. The widow whose selfless act of generosity touched the heart of Jesus in today’s gospel prefigures his own great act of self-giving love soon to be accomplished on the hill of Calvary. By this act he sacrificed himself, as the Second reading today reminds us, ‘to do away with sin once and for all’ (Hebrewa 9:26) and so became the great High Priest of our Faith.

Today’s readings challenge us to imitate the generosity of the widows in today’s readings and become sacraments of God’s self-giving love in a world increasingly preoccupied with possession and security. Let us be givers and not just consumers. I end with a reflection from the pen of Kahlil Gibran that sums up the message of today’s readings: