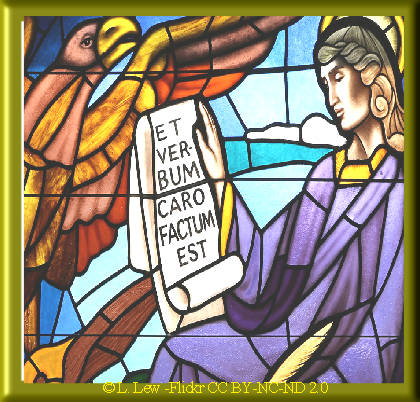 Many of you may remember a popular song in the 1990’s, ‘What if God was one of us’. Written by Eric Bazilian, it became a major hit for American singer, Joan Osborne. The chorus goes like this: ‘What if God was one of us? Just a guy like you and me, Just a stranger on the bus, trying to make his way home’. Indeed God has become one of us;  there is no ‘what if’ about it. That’s what the great feast of Christmas is all about as today’s readings remind us. Our first reading from Sirach states that Eternal Wisdom has pitched her tent and made her home among us. The gospel reading from John states that the Eternal Word, through whom all that exists came to be, ‘was made flesh and lived among us’ (Jn 1:14). These statements give expression to the climactic moment at the heart of our Christian faith, the moment when God in his love becomes one with us. While the human mind cannot grasp the mystery of a love so great, perhaps the following story, that I came across some years ago, many help to give us some limited appreciation of it.

Once upon a time in the ancient kingdom of Siam there lived a prince who fell in love with a fair maiden, the daughter of one of the farm labourers. As heir to the throne, the prince knew that, if he married her, she would become queen and this should make her happy. But he also realised that something would be missing from her happiness. She would admire him and be grateful to him, but she would not be able to truly love him because the inequality between them would be too great. So he decided to renounce his kingship, become a humble labourer on his Father’s vast estate, and offer her his love as an equal. In so doing he knew he was taking a great risk, but he thought it better to risk everything in order to make real love possible.

So he put aside the robes of a prince, donned the clothes of a farm labourer and left the royal palace. Slowly he befriended the maiden and offered her his love. He went out of his way to show her how much he loved her. At first she was withdrawn and distrustful, not believing that disinterested love was possible between humans. And besides she had a poor image of herself and didn’t think she was worthy of anyone’s love. But eventually, as the prince continued to woo her, her resistance broke down and she opened her heart to the young man. Once she accepted his love she began to believe in her own goodness and was able to love him in return. Eventually the prince revealed his true identity and proposed to her. They were married and lived happily ever after.

This simple story is clearly a parable about the kind of love we celebrate today. The Son of God came in humility and weakness. He wanted to gain our love so that we would follow him freely out of love and not in servitude. This, of course, involved a risk. People might not accept him. As John says in the prologue of his gospel: ‘He came to his own domain and his own people did not accept him’ (Jn 1:11). But an extraordinary transformation took place in those who accepted his love and opened their hearts to him: ‘But to all who did accept him he gave power to become children of God’ (Jn 1:12). When we accept God’s love we experience our own goodness and are able to love God and one another in return.

Today’s readings invite us to deepen our appreciation of the great mystery of God’s love for us, a love so complete and unconditional that it made its home among us, and to respond to that love by letting it take possession of our hearts. What a different place the world would be if we all let the message of Christmas take deep root in our hearts so that we become, in turn, channels of that love in our relationships with others. This is essentially the mission of the Church. It is called to bring the balm of Christmas love to the darkest places of our lost and broken world.

Over thirty years ago, I remember listening to a very moving talk by an American     woman, Mrs Leckey, on the need for a fresh vision of the Church’s mission. Speaking at a conference in the Gregorian University, Rome, she said that the post-Vatican II Church had shaped its vision of mission around the ‘pilgrimage’ image. This had, she said, yielded fruitful insights into the nature of the Church as a perfectible community en route towards the future Kingdom, but it was not an adequate image. We needed, she suggested,  a companion image of the Church as ‘home’  – a place of refreshment, intimacy, peace and order. Only when the Church becomes a ‘home,’ can it bring healing, peace and order into a world of chaos and alienation, and this is a vital dimension of its mission. Home is a place where people are accepted and feel secure.

Many people today, both in Church and world, feel lost and alienated. They do not know what it is to have a home. Surely it is an essential part of the Church’s mission to make Christmas real and practical for the uprooted people of our time,  providing a place of intimacy where they feel accepted; a place where they may discover or re-discover a sense of rootedness, of having an anchor in the world. Only on this foundation can the Church bring the message of Christmas to people and become an effective agent of healing and peace for our broken world.