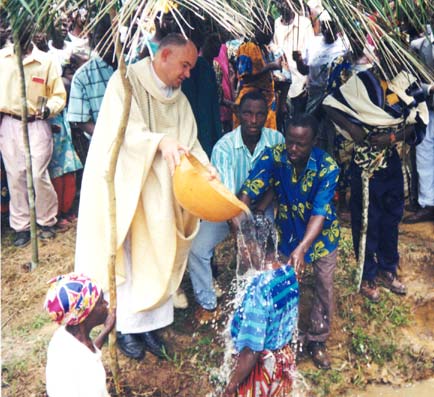 Together in Mission – sermon ideas for Mission Sunday Today we celebrate Mission Sunday. All over the world sermons will be preached about ‘the missions’. Here in Ireland there is hardly a family that has not had some connection with ‘the missions’ – be it a family member, a friend, involvement in fund-raising for some ‘mission’ country…

Ireland has a rich tradition of not only concern for, but active involvement in, ‘the missions’. It is said that Ireland has more missionaries for our population than any other country on earth. In the past, tens of thousands of Irish women and men dedicated their lives to the missions as brothers, sisters and priests. The principal missionary congregations all have Irish members in them. The Society of African Missions (SMA) has listed Irish members among its ranks for more than 120 years of our 157 year history. Today we, and other missionary groups – female and male – continue to send missionaries all over Africa to proclaim the Good News.

And what is that Good News? It is that God loves us! And missionaries show that love in practical ways as much as preaching with their lips: building clinics, schools, digging wells, providing computers for schools, radio stations, the list is as varied as the missionaries themselves. Whatever talents they have, they’re made use of!

In the past much missionary work was centered on preaching the Gospel in places and to peoples who had never heard of Christ. Providing schools, hospitals, clinics – these were part and parcel of the life of every missionary. When home on leave from their mission stations, the missionary would regale his family, friends and the Sunday Mass congregation with stories of ‘darkest Africa’. All with the purpose of raising more funds to continue the work. Those who lived in the 40’s and 50’s will be familiar with bringing a “penny for the black babies” to school.

The peoples the missionary lived and worked (and many also died) with what were (then) largely an uneducated people. They struggled to get clean water, to provide enough food for their children, send them to school (if one existed), civil and religious disturbances, civil wars…. Life was not easy! It was as if Africa was a huge bucket into which the missionary filled lots of goodies!

But that was the face of missionary work in the past. Today, all has changed, and changed utterly.

If one were to speak only of the above images of Africa today, one would not be doing justice to the present reality. Yes, there are still huge problems but Africa today is very different from the one the first Irish SMA’s encountered in 1880.

At 172 million, Catholics in Africa represent 17% of the total population of the continent. There is 1 priest for every 5,000 people (in Europe it’s 1 for every 1,471). Nearly two thirds of the priests working in Africa are Africans. The remainder are the missionaries. From being a missionary Society of European and North Americans, the SMA now proudly number in our ranks priests from 13 African countries as well as from India and Philippines. In 2013, the SMA ordained 23 priests from Africa.

But the greater Good News is that the People of God – the man and woman in the pews – play a vital role in their Church. No longer uneducated but highly skilled and experienced; no longer only the poor but also from all strands of society; no longer living in small villages but in great mega-cities such as Lagos (pictured below), Abidjan and Cairo, church members have an indispensable part in the life of the church, unimaginable still to many church communities in Ireland.

This morning, all over Africa, Church services will be conducted by trained lay people who will lead the people in prayer and ‘preach the homily’ to the congregation. Not only in Africa, but in many many mission lands, it is the lay people who ‘run’ their parish, with the assistance of a priest. The absence of a fulltime resident priest does not mean the parish cannot function. People are visited in hospital, not by the local priest who may live several hours away but by a member of the Catholic community who will pray with them. Very often it is the trained Catechist who will bury the dead.

The Legion of Mary, founded by Frank Duff in Dublin in 1921, has played an inestimable role in this work of evangelization. Legionaries have gone to places to proclaim Christ long before a priest ever set foot there.

Today, we must also acknowledge the work being undertaken by so many Irish ‘development’ workers. Our young people may not be as ‘church-centred’ as in the past but the ever-present Irish concern for the needs touches them and they ‘go out’ to help serve their sisters and brothers in need.

However, the principal message for this Mission Sunday and the unsung story of the evangelization of Africa is the role of the African man and woman.

We could not have done it without their support. Their faith in God carried, and still carries, the missionary, especially in times of difficulty and challenge. It is true that missionaries receive much more from the peoples we serve than we bring. We meet Christ in them, ever before we open our mouths to speak about him!

So today, let your sermon about Africa present the positive images and not only the negative stereotypes. And let us pray that Africa may be set free from its unjust economic fetters, imposed by governments far from African shores – in Europe, America and Asia.

We rightly appeal to the people of Ireland to continue to play their part on helping Africa. But we also encourage them to learn from Africa – to learn especially how to be more actively involved in their Church and to take ownership for it.

The graves of the early SMA and OLA missionaries in Agoué, Benin Republic