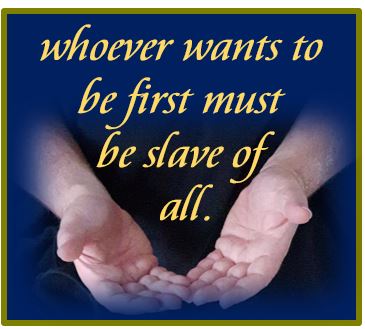 In today’s gospel Mark recounts Jesus’ third prediction of his passion, death and resurrection – his most vivid and detailed. ‘Behold, we are going up to Jerusalem, and the Son of Man will be handed over to the chief priests and the scribes, and they will condemn him to death and hand him over to the Gentiles who will mock him, spit upon him, scourge him, and put him to death, but after three days he will rise again’ (Mark 10:33). Mark sets this  prediction in a dramatic context. Jesus is walking resolutely ahead of his disciples on the road to Jerusalem, knowing full well the fate that awaits him there. The disciples follow, not so resolutely, unable to take in what he is saying to them, or to accept what it implies for Jesus or for themselves. They distract themselves with dreams of power and glory.

This time it is the sons of Zebedee, James and John, two of Jesus’ closest disciples, who approach Jesus and ask him for a favour. They want him to guarantee them the highest places of honour in his coming Kingdom. Actually their request sounds rather like a peremptory demand: ‘We want you to do us a favour’ (Mark 10: 37). Their attitude and approach to Jesus reflects accurately the corporate mindset of today’s secular world, in which social climbers seek their own self interest at the expense of others, and push themselves to the top by any means, fair or foul. Indeed James and John are telling Jesus what to do. We might ask ourselves if our prayers are sometimes like that – telling God what we want him to do for us instead of being open to what God wants from us.

It is worth noting that Jesus does not berate the two brothers or express indignation at their foolish demand. With remarkable patience, he tries to open their minds to what being his disciple really means. He tells them that they don’t know what they are asking. Then he asks them if they can drink the cup of suffering from which he must drink, or endure the baptism of agony he must endure. Confidently, but without any real comprehension, they reply that they can. Jesus assures them that they will indeed be given a share in his suffering but that the dispensation of honours in his kingdom are in the hands of the God the Father.

Overhearing the conversation between Jesus and the two brothers, the other  apostles are furious, not because they are any less ambitious, but because they have been upstaged by James and John. So Jesus calls all the twelve together for a much-needed lesson about power and authority. Painstakingly, he explains the difference between the common understanding of authority, exemplified by ‘the pagans’, their Roman colonisers, and the exercise of authority in his kingdom. ‘You know that among the pagans their so-called rulers lord it over them, and their great men make their authority felt. This must not happen among you (Mark 10: 42).

Roman power, as Jesus’ disciples were well aware, was exercised primarily through force, intimidation and a network of patronage that sought to ensure absolute loyalty to the Emperor. This kind of exercise of power has no place in the Kingdom Jesus is establishing. Authority is not about lording it over others but about serving them in love: ‘Anyone who wants to become great among you must be your servant, and anyone who wants to be first among you must be slave of all’ (Mark 10: 43-44).  In Jesus’ kingdom, power and leadership are manifested in service of others. Jesus himself is the living embodiment of the this kind of leadership. He is the humble, suffering servant depicted by Isaiah in the first reading today,  whose innocent suffering brings healing to others. He is the supreme high priest who, as our second reading tells us, took on himself our human weakness and identified himself with us in every way except sin.

The values of Jesus are profoundly counter-cultural and diametrically opposed to the worldly lust for power and status, which, as Pope Francis frequently reminds us, can also be found within the Church at every level. The message of today’s gospel is as relevant to our time as it was in the time of Jesus. As members of Christ’s body, the Church, we are all called to be countercultural witnesses to God’s reign of justice, peace and love. We are challenged to resist the insidious attractions of fame and prestige and imitate the kind of servant leadership embodied by Jesus, who gave ‘his life as a ransom for many’ (Mark 10:45). It is thus we become great in God’s eyes. Such service is not drudgery or slavery, but liberating and joyful, for it makes us true disciples of Jesus and children of God’s kingdom. In the words of the Bengali poet, Rabindranath Tagore: ‘I slept and dreamt that life was nothing but joy. I woke up and realised that life was only service. I served and I understood that service was joy’.