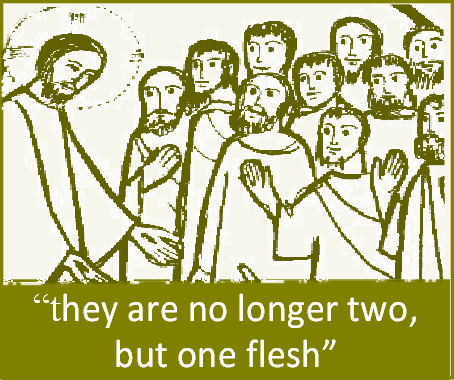 I had several outstation churches in my Nigerian parish. In one of them was a couple who had been married for 40 years. She was his wife though his tradition allowed him more than one, especially as they had no children. There had been tremendous pressure on him over the years to divorce his wife or to take another wife. But he was adamant that he would never divorce his wife even though it would have been easy to do so. In our modern culture today this would have been accepted as rather normal. He always replied ‘I love her and I will always be faithful to her’. But it was almost unthinkable given the culture he lived in that he remained faithful to the one wife. There childlessness was always the woman’s fault. Women had little standing and hardly any rights.

In the gospel today the Pharisees are out to trap Jesus on the question of divorce. The law handed down by Moses allowed it in certain cases. If Jesus declared otherwise he would have been seen as going against the Mosaic Law. Equally dangerous for Jesus was the fact that Herod had taken his brother Phillip’s wife Herodius so Jesus could be seen in some way of accusing Herod for this. We know that John the Baptist was beheaded for condemning Herod’s decision.

Did you notice the way they put the question to Jesus? ‘Is it against the law for a man to divorce his wife’, not is it against the law for a woman to divorce her husband. Divorce was a very real issue for the Jews at the time of Jesus as indeed it is today in many Christian churches. For the Jews there were two schools of thought regarding divorce. One had a much stricter interpretation than the other. The rabbis from this school of thought would have said that adultery alone was the only reason for divorce. In the other school of thought the Rabbis were much more liberal and lenient saying that the man could divorce his wife for almost any reason even to the extent of saying he could divorce her if she burned his dinner or if he found another woman more attractive than his wife!

Jesus widens out the discussion recalling the creation story in Genesis, where it is said that man and woman are created equal by God and have complementary roles. Jesus says that women are not things. They do not belong to men as a bit of furniture or as a garment does. Marriage is the union of equal beings. This is the first account of creation in Genesis chapter 1. Today’s Genesis text comes from chapter 2 which can be misinterpreted to mean that as woman came from man, she is to be his helpmate and is therefore inferior to man. But the truth of it is that both man and woman are made in God’s image and likeness.

Jesus tells us quite clearly that divorce is not part of God’s plan. God’s dream is that a man and woman who married are called to mirror the fidelity of God towards us. A married couple is asked to reflect the covenant love of God for his people, a God who never fails in this promise of fidelity to us. He will never abandon us.

But God knows, as Jesus knew, that we do not live in an ideal world. We are not ideal people. It is very important to have ideals before us and to live by them. But being human and sinners we will fail despite our most noble intentions. We are dishonest if we think otherwise. Any couple married for a long time will say that it takes a lot of ‘I do’s’ for a man and woman to become husband and wife, it takes a lot of dying to self. We all know from experience that there will be a lot of mistakes and compromises called for. But God’s grace, his Spirit is always there to empower us if we call on it. Who doesn’t make mistakes from time to time? This is equally true of priesthood and religious life. It is a process and a lifetime’s work.

The Church must proclaim the ideal of fidelity in marriage. This is God’s dream for us. But the Church also recognizes that it can happen, and does, that the two partners in marriage may be unable to sustain their relationship so that their marriage no longer functions. It has become impossible to live in peace with each other without destroying each other. Here again the Church has to echo the gospel. And THIS IS THE GOOD NEWS OF TODAY’S GOSPEL. It has to proclaim the message of God’s mercy, of his liberating forgiveness. The gospel gives every person a future. There is no human failure so great that it is completely hopeless and no longer open to God’s mercy. God is the God of the second chance and the third and so on. Do we not all know this from our experience? Is a relationship that does not work out the only exception? Not according to God.

Jesus often showed that people were more important than rules or laws. He did not condemn the woman caught in adultery (John 8). He offers her another chance to begin a new life. He spoke to and welcomed the Samaritan woman who had had 5 husbands and was at the time living with another not her husband. And he uses her to evangelise her townspeople. God works in strange ways.

“Lord Jesus, may we never condemn people whose marriages have ended in divorce. Let us remember our own failings and delight in the reality that you are a God of incredible forgiveness and understanding. Amen.”