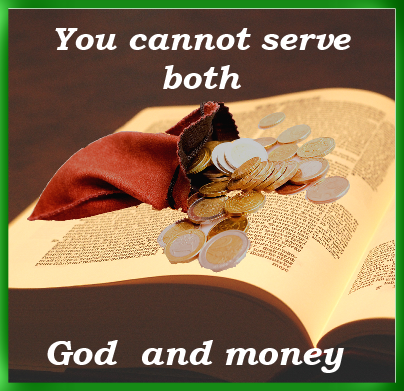 Homily for the 25th  Sunday of Year C

‘Money makes the world go round’. So sang Liza Minnelli in the popular 1972 musical, Cabaret. Certainly money features strongly among the most prominent of human concerns. According to Daniel Kahneman, ‘Money may not buy you happiness, but the lack of it will certainly buy you misery’. Money – its uses and abuses –  is the main theme of our readings today.

Our first reading from the prophet Amos, underlines the abuses to which greed for money gives rise.  Amos lived in the eighth century BC, one of those rare periods when Israel was relatively peaceful and prosperous. Ideal opportunities for trading had triggered ‘an economic miracle’, leading to undreamed of riches for some people.  Behind this success story, Amos sees a world of injustice.   Wealth is concentrated in the hands of a few, who mercilessly exploit the many poor farmers and labourers. The wealthy commercial barons and merchants cannot wait for the Sabbath to be over before continuing their lucrative but dishonest business: cheating on weights and measures, tampering with scales, inflating the value of goods and deflating the value of money. What they are doing is ‘buying up the poor for money’ (Amos 8:6). How frighteningly contemporary all this sounds! Fearlessly, Amos castigates whose who engage in such practices,  ‘who trample on the needy and try to suppress the poor’ (Amos 8:4). He tells them that God ‘will not forget a single thing you have done’ (cf. Amos 8:7).

The responsorial psalm underscores the message of Amos and reminds us that God is on the side of those exploited by the rich and powerful, and will intervene on their behalf: ‘From the dust he lifts up the lowly, from the dung-heap he raises the poor to set him in the company of princes, yes, with the princes of his people’.  This affirmation echoes the familiar words of Mary’s Magnificat: ‘He casts the mighty from their thrones and raises the lowly. He fills the starving with good things, sends the rich away empty’ (Lk 1:52-53).

In our gospel reading from Luke, Jesus refers to money as ‘tainted’ but instructs his disciples to use it ‘to win you friends, and thus make sure that when it fails you, you will be welcomed into the tents of eternity’ (Lk 16: 9).  Certainly, Jesus is not saying that we can buy our way into heaven!  Indeed, the message of the gospel seems, at first glance, rather puzzling and even disconcerting. Jesus tells his disciples a parable about a dishonest but shrewd steward who, having squandered his master’s property, takes immediate steps to secure his own future.  He uses his position to buy favours from his fellow servants who happen to owe his master money, so that they will be obliged to help him when he is sacked. And he does this by cheating his master.

The behaviour of this unjust steward is self-serving and reprehensible, and Jesus is not putting him forward as an example to be followed, but rather as a lesson from which we may have something to learn.  And the lesson to be learned is that, in our service of God and his reign of love and justice, we must be as decisive as the steward was in the pursuit of his own interests. But instead of acting dishonestly, like him, we must take those actions that serve God’s purposes and that lead to a more human and just world and thus win us eternal life. Service of God is incompatible with service of wealth. We ‘cannot be the slave both of God and of money’ (Lk 16;13).

The abuses to which money gives rise are all too evident in our world today, creating a society where the rich grow richer and the poor struggle for survival.  In the words of Pope Francis, ‘the worship of the golden calf of old has found a new and heartless image in the cult of money and the dictatorship of an economy that is faceless and lacking any truly humane goal’. The Pope deplores the tyranny of an unbridled capitalist system built on competitiveness, where there are some winners but many losers. The gross inequality created by this system is shocking and an abomination in the sight of our munificent Creator. Over the past two decades alone the wealth of the ten richest persons in the world has doubled while the income of 99% of humanity has reduced. Today 1% of the world’s population have twenty times more global wealth than the bottom 50%. No wonder that Pope Francis is calling  ‘for financial reform along ethical lines that would produce, in its turn, an economy that benefits everyone. Money has to serve, not to rule’.

Today’s gospel speaks about stewardship. A steward is a person who is given responsibility to handle the goods and property of his/her employer. In the words of Joyce Meyer, ‘We must remember that we are stewards of what God has provided for us, not owners’. We have no absolute right to anything we have. So the question that should concern us is not the question asked by Rod Tidwell in the 1996 movie, Jerry Maguire: ‘Show me the money?’   It is rather the question: ‘How well am I using the resources the Lord has provided me with for his service and the service of others?’  Am I using them to make the kind of friends Jesus refers to in the Gospel – friends who will welcome me ‘into the tents of eternity’ (Lk 16:9)?