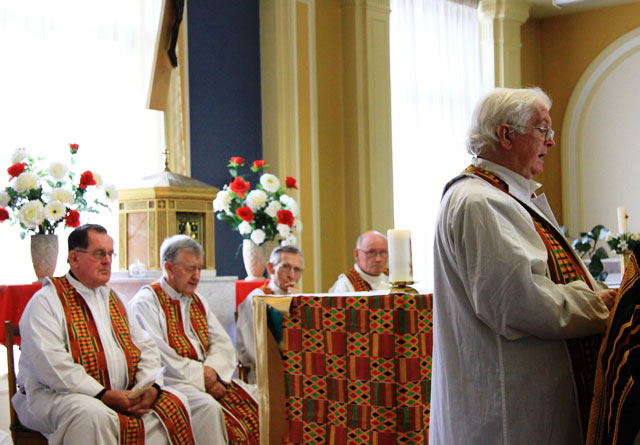 Fr Dan Cashman preached at the Thanksgiving Mass on the occasion of the Golden Jubilee of the 1963 Ordination class. The Mass took place on 15 June 2013 at the African Missions, Blackrock Road, Cork. Fr John Dunne, SMA Provincial Leader, was the Principal Celebrant. One weekend, about 15 years ago, I was asked to help out with preaching at the Mission Appeals in the British Province. After the last Mass on Sunday evening a young boy of about nine / ten years came into the Sacristy and handed me an envelope. ‘That’s my pocket money’, he said. I opened the envelope and found a ten pound note in it. I was very reluctant to take the money but he insisted and then dropped a bombshell. ‘Take it, Father’, he said, ‘for my mother told me that you are the poorest preacher we ever had’.

Now that I have established my credentials let me say that it is a privilege to join the Jubilarians today in thanking God and congratulating the class of 1963.

It is true that all missionaries get older with the passing of years, but the priesthood never ages for each time we offer the Eucharist, Christ is made present again. Furthermore the grace of each sacrament we celebrate is created anew for the person who is looking for a closer union with God and God’s love. The priesthood is as young each day as it was on the day of ordination for the class of 1963. Our reading from the Book of Genesis (read by Denis Collins, pictured left) speaks of the call and journey of Abraham to a distant land. He accepted the challenge and set out, with whatever he had accumulated over the years to find the fulfilment of a dream. I like to think that it was like that for the 1963 class as they gathered together all their notes on epistemology, dogmatic theology and, of course, the vademecum of every missionary: De Reaper. That book, it was said, contained all a missionary needed to know.

The young men of the ’63 class set out on a journey to a strange new land with enthusiasm and hope. No ‘Stage’ in those days; no ‘dipping a toe’ in the water to see if one could take the pressure of missionary work. It was in at the deep end to either sink or swim!

Nigeria was the destination for most of the class and it really was an exciting country in those days. The people had gained independence in 1960 and so the Nigerians themselves were searching for their own identity. That search led them down the path of Civil War and the missionary work moved in a new direction.

Many of the lay leaders in the Church at that time, mostly from the eastern states, just disappeared and so a new community emerged. This new church was slimmer but also more in touch with the customs of the local people. Like the long line of great SMA missionaries who preceded them the 1963 class were sufficiently flexible in their approach to mission that a few years after the end of the Civil War they had a truly local church with not only local lay leaders but an influx of local priests, Rev Sisters and even the beginning of Nigerian bishops.

The Civil War itself threw up a variety of other problems especially in the area of security. Expatriate missionaries were looked upon with great suspicion especially by the Nigerian Army and one had to tread very carefully indeed. One member of this class had to lie on the floor of his Mission House for hours as the bullets whizzed above his head, hitting the walls and scattering chunks of plaster around the room.

Then, as suddenly as it started, the war ended. There was no demand for a Truth & Reconciliation Commission as happened elsewhere. The Nigerian people just got on with life.

Not everyone could relax, however, at the end of the war. Many a Schools Manager had panic attacks when his former teachers returned, besieging the Mission demanding arrears of salary for the three years of the war.

But let us return to our reading from Genesis. We see towns and settlements mentioned like Shechem, Bethel, Ai and the Negev. These give us a picture of Abraham’s journey. Uromi, Aghalokpe, Akure, Ekpoma, Uzuarwe, Ibadan, Pankshin, Ilorin, Shendam, and later Ndola and Tapita, plot the journey of our Jubilarians. The place names are different but the purpose of the journey is the same: to make known a merciful God, to unite all peoples and to open the hearts of all so that they wound understand that God is not a God of fear but of love. Just as Abraham was blessed in his journey our Jubilarians were blessed in theirs, as was the missionary tradition that they lived and the personal gifts they shared with the people. Our Jubilarians were Graced.

Grace, I believe, is a gift we recognize with hindsight. Sometimes we only see God’s intervention in our lives long after it has taken place. Grace quietly enters our spirit and smoothes over the mistakes, lapses and often sheer nonsense that is part and parcel of all our lives. It enables us to forgive ourselves for all the errors we have made in the exercise of our ministry and allows us to focus on what God can do and what God has done in spite of everything. Grace is what keeps us striving to be a sign of Christ’s concern for his people. There have been many changes in the Church over the past 50 years as a result of the Second Vatican Council. Big changes have also taken place in the SMA.

We know that the formation the Jubilarians received was based on teachings that, remarkably, remained unaltered for the best part of a century, so it may have disturbed some to find that Noldin, Tanquery and Bouscaren did not have a monopoly on wisdom and that pastoral options were not always limited to the Pauline or Petrine Privileges and when things got out of hand or too complicated the all-embracing Sanatio! Added to that the upheaval the Society as it set out its own goals and objectives which changed many aspects of our traditional view of Mission.

The prevailing atmosphere and attitudes of the time eliminated the stability of previous years and some were left floundering. That the class of 1963 was able to rise above the uncertainties and fulfil their missionary oath is surely a miracle of grace. It may be that God first sowed the seed for that gift in the preparation they received from the Formation team in our seminary and the prayers of our supporters. During all these changes the central role of the Eucharist never altered. The Eucharist was the one constant in their lives and through their Eucharistic prayer they reached calmer waters.

Fr Gerry Sweeney, ministered in Nigeria and Liberia, was involved in the training of Irish SMA seminarians in Cloughballymore, Wilton and Maynooth, was part of the staff of the Dromantine Conference Centre followed by pastoral work in Clonfert diocese before ill health forced his retirement to the SMA community in Claregalway.

It was the Eucharist that brought them to realize that they, with their people, are the Body of Christ and that we are all interconnected. So they celebrated the Eucharist in their churches and washed the feet of the suffering and marginalised in the streets. It was all Eucharist.

They found that they could offer up in that Eucharist their frustrations and sacrifices associated with their pastoral work and personal concerns. It was this that kept them in ministry and enriched it for as the Second Vatican Council Constitution on the Liturgy says ‘the most holy Eucharist holds within itself the whole treasure house of the Church’.

I suppose as we all look back over our lives we might easily apply the words of Padraig Pearse who wrote: ‘I have squandered the splendid years which the Lord gave to my youth, in attempting impossible things, deeming them alone worth the toil. But Lord if I had these years back, I would squander them all again’.

It is that spirit we are celebrating today.

We thank God for his faithfulness which never ends and which continues to burn in the lives of the class of 1963. So we congratulate you, our Jubilarians, and wish you many more years of fruitful and faithful service in whatever situation you may find yourselves.