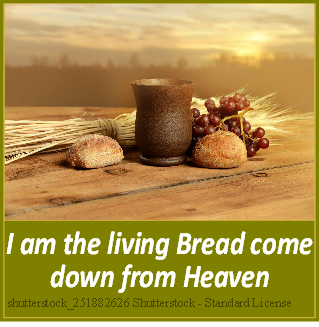 Food for the Journey of Life

We normally think of the prophets as strong, courageous persons, prepared to withstand any opposition rather than compromise the truth of God’s word. However, in today’s first reading we meet Elijah, one of the greatest prophets of Israel, ‘at the end of his tether’.   Seeking to escape the wrath of Jezebel, the wife of King Ahab, he flees into the desert in fear of his life. Jezebel threatened to kill him just as he had killed the priests of the Baal cult that she had introduced to Israel. So we find this mighty prophet alone in the desert, physically and spiritually exhausted, and asking God to let him die: ‘It is enough; now, O Lord, take away my life’ (1 Kgs 19:4). But God has other plans for him. As he lay down to sleep waiting for death to carry him away, an angel of of the Lord comes to him with baked bread and a jar of water, and urges him to get up and eat. Strengthened in body and spirit, we are told that Elijah continued on his journey, walking ‘for forty days and forty nights, until he reached the mountain of God’ (1 Kings 19:8).

Today’s gospel passage continues the theme of Jesus as ‘the bread of life’, linking it to his life-giving death on the Cross. Unlike the manna that nourished the Israelites temporarily during their sojourn in the desert, Jesus is the ‘bread come down from heaven’, giving life eternal. But this bread comes at a cost: ‘The bread that I shall give is my flesh for the life of the world’ (Jn 6:51). It is this bread we receive in the Eucharist. The Eucharist is the memorial of the Last Supper.  In the Eucharist, we commemorate and re-enact the greatest act of love the world has ever known.  Jesus’ last act before his death on Calvary was to share a meal with those he had chosen – his Last Supper. In the course of this meal, he takes bread and wine, blesses them and gives them to his disciples saying: ‘Take and eat; this is my body… Take and drink; this is the cup of my blood. Do this as a memorial of me’. The meaning of Christ’s last meal is inseparable from his sacrificial death, his perfect act of love. Love is manifested supremely in self-sacrifice: ‘There is no greater love than this: that a person would lay down his life for the sake of his friends’ (Jn 15:13). All this is movingly expressed in the Fourth Eucharistic prayer:

‘He always loved those who were his own in the world.
When the time came for him to be glorified by you, his heavenly Father, he showed the depth of his love.
While they were at supper, he took the bread, said the blessing, broke the bread, and gave it to his disciples, saying:
Take this, all of you, and eat it: this is my body which will be given up for you.
In the same way, the took the cup, filled with wine.
He gave you thanks, and giving the cup to his disciples said:
Take this, all of you, and drink from it: this is the cup of my blood, the blood of the new and everlasting covenant.
It will be shed for you and for all so that sins may be forgiven.
Do this in memory of me.’

In the Eucharist, we not only remember the sacrificial death of Christ on the Cross. We participate in it. As the Catechism of the Catholic Church (1994) teaches, ‘The Church which is the body of Christ participates in the offering of her Head [Christ]. With him, she herself is offered whole and entire…. In the Eucharist the sacrifice of Christ become also the sacrifice of the members of his Body’. The importance of the Eucharist is well illustrated in a true story recounted by Timothy Radcliffe in his book, Why Go To Church? In the year 304 AD, a time when the Christians were being persecuted for their faith, a number of Christians were arrested in North Africa for gathering together in a house of a Roman Official to celebrate the Eucharist on a Sunday. When the Roman pro-consul of the area asked the owner of the house why he had allowed these people into his house, he replied that these people were his brothers and sisters. When the pro-consul insisted that he should have forbidden them, he replied that he could not, and added these words: ‘Without the Day of the Lord we cannot live’. Celebrating the Eucharist was what gave meaning to their lives. To echo the words of today’s responsorial psalm, they tasted and saw that the Lord was good, and we are invited to do the same in every Eucharist.

Nourished by the Bread of Eternal Life, we are challenged to continue our Christian journey in good and bad times, until, like the prophet Elijah,  we reach the mountain of God, our eternal home. Let us pray that we will be ever more open to the life that Jesus, the living bread, gives us; that we will welcome and heed the angels he sends us on our journey; and take the time to taste and savour the goodness of the Lord in our everyday lives. Amen