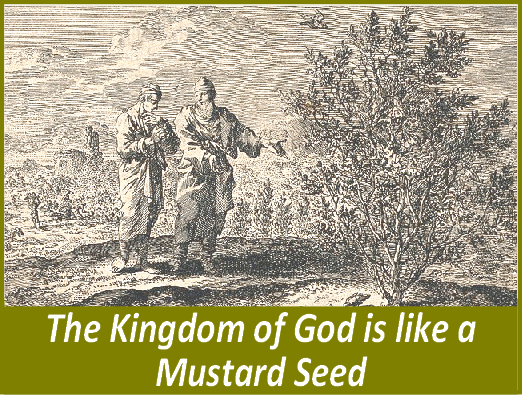 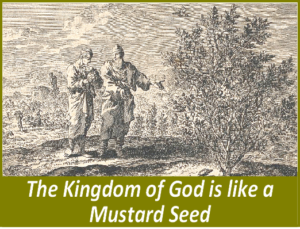 In 1973 a German-born economist, E.F. Schumacher, published a famous book on economics, entitled, Small is Beautiful: A Study of Economics as if People Mattered. The book critiqued the dominant ethos of mainstream economic theory, then current, that ‘bigger is better’, and argued in favour of small sustainable technologies, respectful of nature and favouring people above profit. The book became an immediate best-seller. In 1999, The Times Literary Supplement ranked it as one of the most influential books of the twentieth century. Today’s scripture readings remind us that small is not only beautiful; it is God’s chosen way of manifesting his power and establishing his reign on earth. The God we worship is the God who uses tiny things to make big things happen; the God who chooses small beginnings, insignificant events and people to achieve his purposes; the God for whom vulnerability, powerlessness and smallness are blessings rather than curses.

Our first reading from the prophet Ezekiel, who lived in the 6th century BC – a time when the people of Israel were exiled from their homeland and reduced to slavery in Babylon. The prophet employs the metaphor of a small shoot becoming a mighty cedar tree to encourage his disheartened fellow Israelites and keep their hopes alive. He assures them that God has not abandoned them, that he will bring them back to their own land and make them great again:  ‘I will plant it (the shoot) myself on the high mountain of Israel. It will sprout branches and bear fruit’ (Ezekiel 17:23). The shoot refers to God’s faithful remnant, the ‘Anawim’ or ‘little ones’, those who remained steadfast in the midst of terrible adversity and became the nucleus of the restored Israel after the exile. It was from this faithful remnant that the Messiah came. By their fidelity to prayer and humble submission to God’s will, this remnant, this small shoot, transformed the messianic hope of Israel from a political to a spiritual one. To the ‘anawim’ it was no scandal for the Messiah to come from a poor family and be born in a cattle-shelter.

In today’s gospel passage from St Mark, Jesus employs the image of small seeds producing extraordinary results to explain the growth of God’s reign on earth. Mark’s gospel, like the book of Ezekiel, was written at a time of persecution and crisis to strengthen the faith of the early Church. The two great apostles of Rome, Peter and Paul, were dead. The expected Parousia – Jesus’ Second Coming – hadn’t arrived. Many Christians were abandoning their faith, while self-appointed prophets and teachers were distorting the message of Jesus and creating confusion. The faithful few were wondering if God had abandoned them. It seemed as if the Church was doomed and the Kingdom of God a long way off. In this context Mark recounts five parables of Jesus about the Kingdom of God and how it grows. Two of these parables appear in today’s gospel reading. The first uses the image of seed growing mysteriously by its own inner energies in the dark of the night as well as in the light of day. The second employs the image of a tiny mustard seed developing into a large shrub with wide spreading branches providing a home and shelter for the birds of the air. Both images, taken from nature, highlight the mysterious manner in which God works to achieve his purposes. God is at work even even while we sleep or when we think he is asleep or has abandoned us. ‘Of its own accord the land produces first the shoot, then the ear, then the full grain in the ear’ (Mark 4:28).

We live in a time, not unlike that of the Israelites in exile, or of the early Church at the time of Mark: a time of unforeseen decline for the Irish Church, both in the practice of the faith and its influence on society; a time of general mistrust of religious and civil institutions; a time of confusion and uncertainty. But if God’s Kingdom is like a mustard seed, then the size of our institutional church is not important. What matters is the quality of our witness.  This is the good seed which, in God’s time and God’s way, will yield miraculous results. So, let us not lose hope in the face of adversity. Like the ‘anawim’  of old, let us learn the art of vitality in smallness and increase the quality of our faith and relationships in this seemingly fallow time. Let us work for the coming of the Kingdom even if the desired result is not yet in sight. And let us continue to nurture the seed we have received.

I will end with a short story I came across a few years ago. ‘Many years ago two young people, a man and a woman, were on board a sailing ship, returning to their home in a distant island. The man noticed a little grain of corn at his feet. He picked it up and examined it. ‘Ah, it’s only a single grain’, he said. ‘If I had a sackful, it might be of some use!’ So he threw it away disdainfully. But the woman bent down, picked it up, put it in her pocket, and treasured it till they reached their island home. Then she sowed it. It grew into a plant and yielded a tiny crop, so small as to be laughable. But she sowed that again, and the next time the result was enough to fill a cup. This again she sowed and there was enough to give a few grains to her many friends. So the crop grew and, in the end, yielded an abundant harvest. The little grain of corn was the means of introducing corn to the islands’.