Home ___Storage Justice Issues We are the Genesis Generation

We are, quite literally, the Genesis Generation. Never, since the story of Adam and Eve in the Garden of Eden, have human beings looked into the very heart of the Tree of Knowledge and been so indifferent. At least Adam and Eve allowed their curiosity get the better of them, for which they suffered the consequence. We are guilty of knowing and/or failing to listen.

Editor’s Note: On Friday, March 15, 2019, hundreds of thousands of school children are expected to strike across the world in an effort to wake-up their respective government’s to the threat posed by Climate Change.

Scientists are telling us that we have little more than 12 years to stabilize the Earth’s warming atmosphere, and that if we fail to keep temperatures below 1.5%C, we will lose control and catestrophy is inevitable.

The extraordinary reality is, we are sleepwalking headlong into an abyss and Government’s, who should be the guardians of human liberty and the wellbeing of their people and the planet, are so focused on day to day concerns, they are failing to adequately address what is happening.

We are, quite literally, the Genesis Generation. Never, since the story of Adam and Eve in the Garden of Eden, have human beings looked into the very heart of the Tree of Knowledge and been so indifferent. At least Adam and Eve allowed their curiosity get the better of them, for which they suffered the consequence. We are guilty of knowing and/or failing to listen. It is not unlike the story of Abraham pleading on behalf of 50 then 10 righteous people who might save Sodom and Gomorrah from destruction. Genesis 18:16-33.

The great Dom Helder Camara signed the back of a photograph for a young Dublin woman, Margaret Beatty, on 5 August 1980 with the following words that are, indeed, prophetic: “Each of us is responsible for the destiny of humanity by our actions or omissions.” 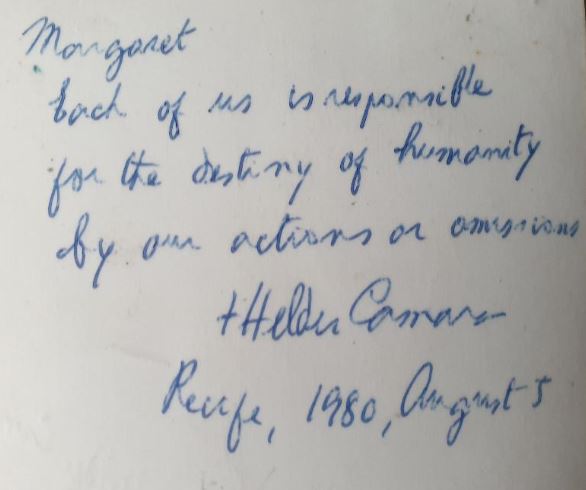 When it comes to Climate Action, perhaps the righteous of the world will not be found amongst the adults or politicians – but amongst our young people. Their voices are rising in anger at what we have done and the precarious future we have left for them to deal with. We have utterly failed to realise that we do not inherit the earth from our parents and ancestors – we borrow it from our children and their offspring.

Tomorrow, March 15th, 2019, Irish school children will go on strike when they walk out of school to protest against Global Warming and to call upon the Irish Government to upscale their commitments and to meet our responsibilities. They will be joining children across the globe in a movement that began with one young Swedish student, Greta Thunberg, taking a stand.

The SMA offers our support to all the Irish students who will participate in the Climate Strike and we will follow-up by calling upon the Government to establish a single Ministry for Climate Action and not one that is buried under the concerns of the triple portfolio currently carried by Richard Bruton, Minister for Communications, Climate Action and Environment. The decoupling of the Climate Action portfolio will send a signal that the Government is, finally, taking Climate Breakdown, caused by Global Warming, seriously.

The article begins: “Dublin — Weekly strikes by schoolchildren protesting over the threat posed by climate change are set to escalate March 15 in Ireland. Thousands of students are expected to assemble outside Dáil Éireann, the Irish house of parliament, as part of a global day of action aimed at pressuring governments to act to save the planet before it is too late.

Since last December, a steady flow of students, as well as some teachers, parents and grandparents, have kept a weekly vigil in the center of Dublin as part of Swedish student Greta Thunberg’s #FridaysForFuture movement. The 16-year-old staged the very first strike in August 2018 outside the Parliament House in Stockholm. The last week of February, a group of more than 200 students showed up in Dublin chanting, “We are unstoppable — another world is possible.”

You may read the full NCR report by clicking here.