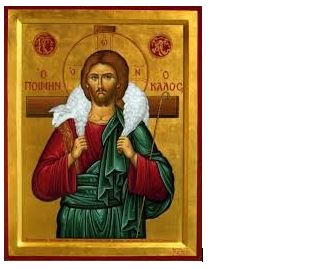 In biblical times there were two kinds of shepherds. There was the hired hand for whom minding the sheep was just a job. He would move from one flock to another depending on the conditions of service, but would never dream of risking his life for the sheep. If he saw wolves or thieves approaching, he would flee for dear life and leave the flock to the mercy of the marauders.

Then there was the shepherd-owner of the flock who stayed with the same flock all his life. He knew every sheep in his flock individually. He could call each one by name and relate the life story of each one – when and where it was born, the difficulties it had gone through, its characteristics or ‘personality’ so to speak. The Shepherd-Owner was devoted to his sheep. He knew which one was likely to lag behind the others on a long trek, and he would lift it up and carry it in his arms. He knew the one that was likely to stray from the flock and kept his eye out for it when passing through dangerous terrain. When attacked by wolves or thieves, he would fight to protect his sheep and even lay down his life for them.

The expression “laying down one’s life” comes from the practice in Israel of keeping the sheep in an enclosed space with just a narrow opening for the sheep to go in and out.

At night the shepherd would lie down and stretch his body across the opening so that the sheep would not wander out and wolves would not enter in. If one of the flock went missing, he would climb mountains and hills looking for it, calling out its name. And whether the missing sheep had fallen into a pit or was trapped in a bush of thorns, as soon as it heard the voice of its master, it would bleat and the shepherd would go and rescue it.

Jesus is the Good Shepherd par excellence. He is also proposing this image as a model for leadership among his disciples – a leadership where each person is known by name. In today’s computerized society we are no longer called by name. We are known by numbers – our PPS number, driving license number, credit card number, etc. and so we become simply number so-and-so. For a society like ours, the Good Shepherd model of leadership is profoundly counter-cultural. 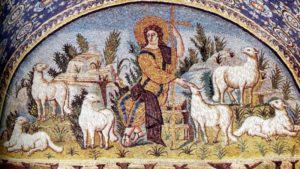 The Good Shepherd Leader knows each person in his care individually and personally, his or her particular history, distinct abilities and needs. This is the way priests, deacons, and all Church ministers, including parish personnel, should relate to the people they serve. When people begin to see that we are not just doing a job but relating to people personally and truly caring for them, then, perhaps they see the true meaning of Christian vocation and be more willing to opt this ministry. Let us pray for all involved in pastoral ministry that they may display in their work the qualities of the Good Shepherd, not those of the hired hand.