Home News Visit by US Department of State Staff and Cois Tine’s submission to... 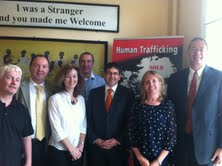 Department of State staff Peter Glennon and Andrew Wilson, based at the U.S. Embassy in Dublin, visited Cois Tine in September. The visit followed on Cois Tine’s research published recently in the Book “Open Secrets an Irish perspective on Trafficking and Witchcraft.” Cois Tine’s research and experience of encountering victims of trafficking was the subject of the visit.

The US State Department is responsible for the compilation and publication of the annual “Trafficking in Persons Report” a document which has become accepted worldwide as the authoritative barometer of human trafficking across the world. The support given by the U.S. Department of State in highlighting the plight of victims of human trafficking all over the world is a major catalyst in promoting awareness and action to prevent this crime.

Cois Tine has recently made a submission to the Irish Government Consultation in relation to a review of legislation on Prostitution. This submission was also based the recently published research material that firmly links human trafficking with prostitution in Ireland.

Submission Text  This submission is made on behalf of Cois Tine a Cork City based organisation that has provided support services for Asylum Seekers, especially those of African origin since 2002.

Over the past ten years many issues affecting our client group have emerged among them are human trafficking for the purposes of prostitution and the related use of witchcraft to control its victims. In order to gain a better understanding and also to find ways of responding to these complex issues a yearlong programme of research was undertaken. This has resulted in the recently published book called: Open Secrets an Irish Perspective on Trafficking and Witchcraft. We make our submission on the basis of this research and on our experience over the past ten years.

Research undertaken for the above mentioned publication shows that human trafficking is driven by greed and demand. In purely economic terms, using trafficked and unpaid slaves reduces expenditure and increases profits. The research also shows that the majority of people trafficked into Europe and Ireland end up in the sex trade/prostitution. Demand for paid sex and the wish of those who organise it to maximise profits causes trafficking and the forcing of its victims into prostitution. These victims are reduced to commodities bought from traffickers and repeatedly sold by brothel keepers to meet the demand of punters. The humanity, rights and human dignity of the victims are completely denied and as a result they suffer devastating physical and psychological harm.

Current legislation against operating a brothel or soliciting is clearly not a sufficient deterrent. Profits far outweigh the risks. The Carroll case investigation has shown the enormous profits that can be made. Even though this case was successfully prosecuted the current proliferation of brothels shown during the recent countrywide raids is clear testament the fact that profits are still being made and that they outweigh the risk of prosecution.

Current legislation is focused on the supply it is our contention that the demand must also be addressed. We therefore recommend the following:

• The criminalising the purchase of sex under Irish legislation. This would, we believe, greatly reduce demand for purchased sex and in turn the need for trafficked persons to meet this demand.

• In addition to criminalising we also recommend that in cases where it has been proved that telephone numbers advertised on websites or printed publications are being used to make contact or the purposes of selling sex then legislation allowing these numbers to be disconnected should be introduced.

• Irish publications and Websites advertising Escorts or Personal Services should also be required to advertise a “Health Warning” highlighting the fact that it is illegal to purchase sex (if such legislation is enacted) or that the purchase of sex from a trafficked person is an offence. Such Health warnings should also contain a number through which suspected cases of trafficking can be reported.

• A body or organisation that will follow up on such contacts should be established. Consideration should also be given to establishing a third party reporting system that could identify trafficked persons or traffickers. A third party system might make reporting easier for those who do not want direct contact with the authorities.

• Any legislation introduced should be victim centred. Where it becomes clear that a prostitute has been trafficked then the law should ensure that every effort is made to protect their rights and restore their human dignity. The wish to prosecute traffickers must be balanced with the need to need to protect the victim and their relatives who are also often under threat from traffickers. The reality of the hold that witchcraft may have on victims must also be accepted and dealt with appropriately.