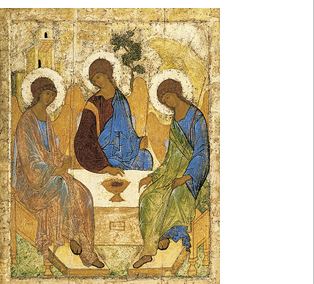 The Trinity is the defining doctrine of Christian faith, the central statement about the kind of God we believe in. We are baptized “in the name of the Father and of the Son and of the Holy Spirit” (Mt. 28:19) and begin our formal and informal prayers with this Trinitarian formula. Yet, in 1970, the great German theologian, Karl Rahner, made this surprising comment: ‘Despite their orthodox confession of the Trinity, Christians are, in their practical life, almost mere monotheists.’

According to Rahner, the doctrine of the Trinity was, for most Christians, a matter of a formal profession of faith with little or no impact on their day-to-day life and worship. Just how irrelevant this doctrine can seem is borne out by a remark made to me by a missionary priest many years ago. He was explaining to me why he had decided to omit any reference to the Trinity in a catechism he was writing for the use of catechists in his parish.  He had omitted the Trinity, he said, because it was ‘too complicated. To mention it would only confuse the people.’

But perhaps there is another reason why the Trinity has not had much impact on our everyday lives. Traditionally, God was seen as immutable, unlimited, all sufficient and perfect, far removed from the world of creaturely imperfection. The relationship between God and the world was presented as a one-way relationship. God, we were told, could not be affected or moved by anything that happens in the world – an unmoved mover. St. John Henry Newman’s beautiful hymn, Abide with Me, might be seen to reflect this understanding of God as unchangeable perfection.

‘Change and decay in all around I see;
O thou who changest not, abide with me.

This kind of language can make God appear remote or distant from us.  But surely this is not the God revealed in the life and ministry of Jesus.  The God of Jesus is a God who goes in search of men and women and rejoices when a lost son finds his way back to the house of his Father. The parable of the Prodigal Son (Luke 15: 11-32) portrays God as a loving Father who responds to human decisions and is affected by them. The God of the Bible is not  remote, aloof, indifferent, self-enclosed, perfect Being, but a loving Father who is interested in and cares for each person, from the smallest to the greatest – a passionate and compassionate God, capable of being deeply moved by the sufferings of his creatures. In the words of Pope Francis, the Scriptures reveal a ‘God of Love who created the universe and generated a people, became flesh, died and rose for us, and, as the Holy Spirit, transforms everything and brings it to fullness’ – a God who is Father, Son and Spirit.

However, the doctrine of the Trinity is not just about God’s eternal being. It is as much about us as it is about God, about how God relates with us and how we should relate with one another. As the Australian theologian, Catherine La Cugna, states:

‘The life of God – precisely because God is triune – does not belong to God alone.  God who dwells in inaccessible light and eternal glory comes to us in the face of Christ and the activity of the Holy Spirit… The heart of the Christian life is to be united to the God of Jesus Christ by means of a communion with one another’ (God for Us, p. 1).

Hence, the doctrine of the Trinity is most relevant to our everyday lives for it is ultimately about what it means to be human persons created in the image this God of Love. To be human means to be Godlike, to be fully alive in love, and engaged in life-giving relationships with others. All human beings are called to participate fully in the Trinitarian communion of Father, Son and Spirit through their loving communion with one another. And we, the members of the Church, are called to be witnesses of this awesome destiny to a world thirsting for love.