Home ___Storage Irish Province Special Eucharist to commemorate the 101st Anniversary of the death of Count...

The generosity of Count Llewellyn Blake to the Society of African Missions will be celebrated at a special Eucharistic celebration at 10am on Tuesday 12 September 2017 at St Joseph’s SMA Parish Church, Wilton. All are welcome to join us.

Count Blake’s generosity allowed the Irish Province of the Society of African Missions to become firmly established. He was one of the first supporters of the SMA, a tradition that still continues today through the annual contributions made by thousands of members of the Family Vocations Commuity (FVC). His support and the continued support of many people around Ireland today allows the work of the SMA to continue and to flourish.

The intention was to celebrate the centenary of his death last year, 2016, but because of the restoration work being carried out on the Church in Wilton it was decided to postpone the celebrations until this year, the 101st anniversary of his death. 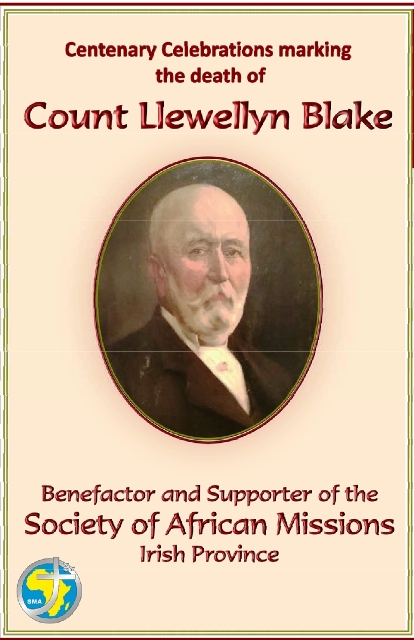 Llewellyn Blake was born at Ballinafad, Co. Mayo. He was the youngest of five boys, one of whom became a member of the English Parliament.

The Blake family was one of the most prominent Catholic families in Mayo and Galway since the time they arrived from Wales in the twelfth century.

Llewellyn served for fifteen years in the Connaught Rangers, seeing service in India. He retired with the rank of Lieutenant Colonel.

When he was about forty years old he married a widow, Mrs. Honoria Murray of Kinvara, Co. Galway. Always a devout man, on the death of his wife without issue, he dedicated himself to a life of prayer and charity.

Count Blake served the community as a local Magistrate. He was considered a very impartial magistrate, whose judgments were wise and fair.

Being a man of wealth he spent a considerable time seeking out suitable charities to endow. Count Blake was renowned for his interest in and support of any group concerned with “the propagation of the faith in Ireland, England and in foreign missionary lands.”

His first contact with the SMA came in 1899 when he donated sums of money to a variety of religious congregations.

Fr. Zimmermann, who was the leader of the recently founded Irish branch of the Society of African Missions, was one of the recipients of one such donation. He responded to the Coun

t by a lengthy letter in which he outlined detailed plans for an Irish mission to Africa.

Fr Zimmermann followed up his letter by calling on Count Blake in his home at Ballinafad and presenting at first hand, his vision of a future which would revive Ireland’s ancient missionary glory.

Count Blake was obviously impressed with this Swiss priest, and by what he had to say, so much so that he decided there and then to make substantial funds available to the Irish branch of the Society for the education of candidates to the missionary calling.
And this work continues to this day through our loyal SMA supporters, particularly members of the Family Vocations Community (FVC).

Count Blake had spent some of his teenage years in France and perhaps this is what endeared the SMA to him. As well as donating substantial funds he also gifted the Society with two extensive properties, one at Ballinafad, Co Mayo and one at Kilcolgan, Co Galway.

For his support of the missions Llewellyn was created a Papal Count by Pope Pius X in 1905. In 1913 he became an Honorary member of the SMA.

He died on 8 September 1916 and is buried behind our Church here in Wilton, looking down on the College where hundreds of SMA students were trained for the missions.

Without doubt it was due to the support of this generous Mayo man that the SMA was able to put down solid roots in Ireland.

(This leaflet has drawn on information in the official biography of Count Blake, written by Fr. Edmund Hogan SMA, Irish Provincial Archivist and from past issues of the African Missionary Magazine.)