Home About SMA SMA support the care and reintegration of the mentally ill in the...

Editor’s Note: Across the world there are angels of light, often working with quiet devotion, fueled by a faith and love inspired by the humble carpenter of Nazareth, Jesus the Christ. One such bearer of light is a Catholic layman named Grégoire Ahongbonon who once considered taking his own life but in the depth of his despair found amazing grace.

The work of Grégoire Ahongbonon is no less heroic than that first undertaken by Mother Teresa on the streets of Calcutta. The world needs to know more about his work and to be inspired by his Christlike compassion.

The SMA are privileged and humbled to work alongside and support the efforts of Grégoire. Below we offer snippets from a recent FIDES article about his work, supported by the SMA. We also provide a link to a BBC article, as well as the link to the charity he founded, the Saint Camille Association. Before that, however, we encourage you to look at this short documentary that offers an insight into the horrors that can be endured by mental health sufferers, when ignorance and superstition hold sway; and the miraculous transformations that occur in the presence of Grégoire Ahongbonon:

The Saint Camille Association in the Ivory Coast and Benin Republic supports mental health sufferers who are too often rejected by their families and society. FIDES reports specifically on the care and reintegration of the mentally ill in the Benin Republic, with the support of the SMA.

The Association Saint-Camille-de-Lellis (usually named “St-Camille’’) is an African charity that provides services to the mentally ill. It was founded in the Ivory Coast in 1991 by Beninois, Grégoire Ahongbonon. In 2004, Grégoire established a organisation in Benin.

In Africa the mentally ill are often marginalized, even by family members because it is thought they are possessed by evil spirits. But the Saint Camille Association seeks to destigmatize the illness by working closely with families and communities.

SMA volunteer, Dr. Francesco Andaloro (whose work we covered on 1 October 2018 and which can be reviewed by clicking here) is working to support Grégoire and told FIDES: “The number of patients cured is remarkable, especially if we bear in mind that patients are not hospitalized as in our psychiatric wards.” Dr. Andaloro is an Italian dentist who is working in Benin with his own project “A smile for Africa”, which provides dental healthcare to the poor.

The doctor, who works with the Society of African Missions (SMA), told the Vatican news agency, “Under medical and pharmacological control, these people live as if they are in a small village. They do a lot of recovery activities all together. Many of them are then reintegrated into their families of origin.

“In 2017 there were 3,771 new cases and over 68,000 consultations, with 4,430 patients being admitted to the different Saint Camille centres throughout the Benin Republic. Of these, 97% were reintegrated into the family while 1% was reintegrated into rehabilitation centres. What is striking is that all the people working in the various centres are all former patients who decided to stay to help other people”.

“It was a completely new experience,” Dr. Andaloro continued. “It is not easy but with enthusiasm we overcame the difficulties; our mission has allowed us to treat all the mentally ill people, who are also in need of dental care.”

In addition to dental services, “what remains in our hearts is the certainty that the path undertaken with the project “A Smile for Africa” is being carried out and as we move forward we add small pieces to improve even more”. 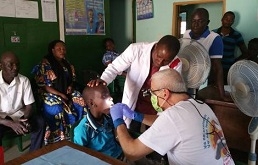 Accompanied by Fr Filippo Drogo SMA, Dr. Andaloro recalled a day they went to a family home run by nuns in Ouidah, the ancient colonial capital of Benin. “Here there are thirty children, between 3 months and 14 years of age, abandoned by their parents, or orphans. During the day spent with them we visited and looked after all the children, and also the staff present in the centre.

“The goal of the project is not to create a dentistry department, but quick and mobile structures able to treat the ‘poorest of the poor’ who live in the intervention areas of the SMA missions, organize campaigns on dental health and prevention.”

Grégoire Ahongbonon was the subject of a BBC documentary in February 2016 which can be accessed by clicking here.