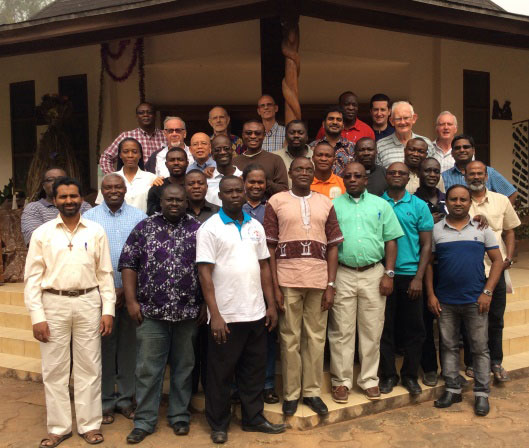 There was a three day meeting of SMA formators at the SMA International Spiritual Year Centre – Centre Brésillac – in Calavi [Republic of Benin, formerly known as Dahomey] from 6 – 8 January organized by the SMA Formation Commission led by the SMA General Councillor, Fr Francis Rozario. He is pictured front, left in our group photo. Thank God the Society now has 299 students in formation throughout the world, in 16 formation centres / seminaries. This figure does not include those who are in ‘Preparatory programmes’, i.e. learning about the SMA before entering the formal training programme for priesthood in the Society of African Missions.

Thirty one formators attended the meeting, together with representatives of the Districts-in-formation and two members of the General Council [Fr Rozario and Fr Francois Gnonhossou]. The striking difference between this meeting and one held in the Ivory Coast in the 1990’s was that at the earlier meeting there were no African, Indian, Filipino or Polish formators but at this meeting the European formators were completely outnumbered by those from Africa and Asia. From a position where many formators came from Ireland [and France] we now have just six Irish involved in formation work [three of these attended the meeting]. This brought a new dynamic to the meetings and was a visible sign of hope for the future of the SMA. “See I am doing a new deed. Even now it comes to light – can you see it?” (Isaiah 43:18).

The purpose of the meeting was to get all formators singing from the same hymn sheet. In preparation for the meeting Fr Rozario identified four issues for us to focus on:
1. What kind of missionaries does the Society need today? (the basic Human, spiritual, pastoral and intellectual qualities, skill, attitudes etc). Let the starting point of the reflection be the Society of today and the areas where missionaries are needed.
2. Identify the programmes, styles, methods that are used today in our formation houses and in the whole formation system that help in one way or the other the development of the qualities mentioned above.
3. What are the obstacles to the desired type of formation?
4. What needs to be strengthened and what needs to be modified in SMA Formation? The meeting was fortunate to have Fr Hugh Lagan SMA in attendance. He gave some presentations during the meeting, which were practical, down to earth, helped by a skilful use of modern technology. Hugh is a product of the Irish / Maynooth / American formation methods. After some years in pastoral work in Tanzania he moved into formation work in Nairobi, Kenya and holds a Doctorate in Clinical Psychology. Thus he combined experience with a wealth of academic knowledge. He is currently working with the Church leadership in southern Africa to develop education and clinical services for clergy and religious.

It’s not possible to give even a summary of his presentation but here is a sampling of some of the ideas participants noted:
• American psychology is out. The new in word is psycho-spiritual development.
• Psychological assessment is primarily a tool to help students to grow, not a method to screen out students.
• Recent surveys have shown that the qualities people look for in a priest are:
– Authenticity… authentic relationships are a key to priesthood and formation
– Commitment… to one’s ministry and in formation to the formation process.
– Presence… be really present to people.
– Inspiration… the ability to inspire students and later as priests to inspire people.
– For some students the goal is survival rather than growth.
– A vocation is an encounter between God and a human being, a meeting of two freedoms: of God who calls, and of the individual who responds.
– distinguish between fidelity to a lifestyle and fidelity to Christ.
– The fundamental question for students is not ‘should I stay? Should I go? Will I be sent away?’ but ‘how do I stay?’ Hugh stressed the importance of each student developing a growth plan with the help of formators. Its goeal is to build up the student’s strengths and grow in his area of weakness. Formation invites those making the journey to decide between the high cost of Gospel living in the SMA and the demands of an exclusively private understanding of the Gospel.

The community chapel where the thoughts, discussions, decisions of the meeting were brought to the Lord in prayer.

Authentic relationships are at the heart of Formation. Formation is a life time process for SMAs (SMA Formation Charter, #18).

In many ways the most important aspect of the meeting was the coming together and sharing of experiences from different countries and cultures culminating in a get together at the Regional House for a barbecue after a a pleasant afternoon at Cotonou beach.

Though finance was not the main focus of the meeting, it did emerge as a major challenge for the future, highlighted by the fact that in 2014 the budget requests from the various formation houses amounted to $1.6 million dollars while the amount available to the General Council for distribution was $1 million. This presents a challenge to each Region and the Formation House(s) within them to seek ways of raising more funds locally. The older units of the Society continue to provide what they can but as their fund-raising efforts diminish we will need to find alternative sources for our costs.

The new Districts-in-formation have met the challenge of providing formators, as the Irish, French, Italian and others diminish. So too they will be up for the challenge of meeting their financial requirements.