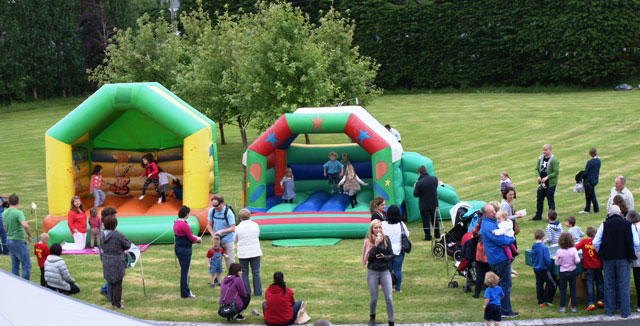 Sunday, 1 June, all roads led to the SMA Claregalway for the annual Family Funday. Due to the mighty work of a host of volunteers – young and the not so young, from 15 to 85 – a very enjoyable day was had by all who came to support the missionary work of the Society of African Missions (SMA). Without doubt one of the highlights was the Dog Show.

Tom McCann and Tom Tarpey organised the event and got a host of sponsors for all the prizes.

The variety of dogs on show was amazing to those of us who know little about them. One of the most interesting was a Basenji, also called the African Hound. This dog, which originates from the Democratic Republic of the Congo, was one of the dogs from the McDermott family in Claremorris.

The registration charge for the Show went in its entirety to the SMA. The two Toms were ably assisted in judging the 19 different categories by Catherine O’Donnell and her son, Shane. They took great care and attention in assessing the different classes and putting the dogs (and their handlers) through their paces. Another interesting dog at the Show was a miniature Jack Russell which the ‘Swan Man’, Mr Toni Luff, brought along for the children to marvel at. See Dog Show pictures here.

One of the strengths of the Claregalway Family Funday is the huge number of volunteers. Young and old came from all over the county and beyond to lend a hand at setting up stalls, setting out the different items for sale, baking dozens of cakes and bread, marking off different parts of the grounds for the Dog Show, making sandwiches, Food stall, Bouncing Castles, kids races etc etc.

And most importantly staying on to clean up afterwards! It was amazing that by 7pm everything was tidied so well one might be forgiven for thinking nothing had happened there on Sunday! With so many dogs participating in the Dog Show (170 entries in 28 classes) there was not one piece of evidence of their presence! So thanks to all for their tidiness as well as to everyone who cleaned up afterwards.

Our photo on right shows Mrs Ann Codyre with her grandchildren… Cathal and Darragh keep an eye on the camera while Granny Ann and Saorcha keep a better eye on business! The multifunctional Hall was well-used: Padini the Magician entertained dozens of the younger ones, making playing cards smaller and larger and all sorts of other tricks; the Corrib School of Dancing, which draws dancers from several parishes in the area,  had several different sets to entertain us all. The young children were lined up at the foot of the stage staring in awe at the different reels and jigs from the girls and (on this occasion) one boy.

Outside music was provided by the Lackagh Ceili Band as well as Matt Cunningham and his grandson Mark, ably assisted by Gabriel Monaghan.

Our photo shows Mark observing the dexterity of his granddad on the fiddle. And Mark is no mean Accordion player himself. Keep it up.

And for those of us who were hungry and thirsty the sandwiches and buns production line in the kitchen was in full swing throughout the afternoon. For the more energetic among us there were plenty of possibilities for burning up the kilos or, in the case of the children, burning up their boundless energy during the ‘Sports Day’ part of the Funday.

The mighty efforts of Colman Green paid off with dozens of children enjoying the sack, egg and spoon and all sorts of other races.

Even some of the fitter daddies and uncles had a race and Paddy Collins beat his cousin, Damian Francis, into third place. Damian will have to work on the waist line if he’s to beat Paddy next year!

Colman had several helpers including Fr Brendan Dunning who was responsible for giving out the medals and the lollipops….. this Reporter is reliably informed that there were several lollipops missing at the end of the day but Fr Brendan denies all knowledge of their whereabouts! And by now the evidence has probably been eaten! Former SMA Community Leader, Fr Seamus Nohilly, enjoyed his visit to the Funday knowing that someone else was doing all the work. He is pictured enjoying a stroll around with Margaret and Maurice Byrne and Helen Tobin (2nd from right), a sister of Fr Frank McGrath SMA, formerly of Williamstown and now in Achill parish.

To see more photos from SMA Claregalway Family Funday click on the links below: