Jesus told his apostles before he left them at the Ascension: “You will receive power when the Holy Spirit comes upon you, and you will be my witnesses in Jerusalem, and in all Judea and Samaria, and to the ends of the earth!” (Acts 1:8)

Many churches and public buildings in Ireland and Britain are being lit up in red this week, and people are wearing a red item of clothing, to help shine a light on the reality of Christian persecution across the world, and to highlight the injustices perpetrated against other minority and faith groups. 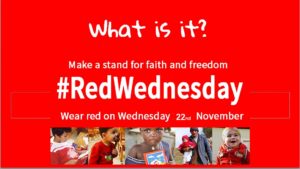 It happens that #RedWednesday this year falls on the Feast of Saint Cecilia – perhaps one of the most well-known martyrs of the early Christian Church. Wearing red on 22nd November is therefore nothing unusual – we wear red vestments on all the martyrs’ feasts and also on days which recall Christ’s suffering, like Palm Sunday and Good Friday.

Red also points us to the Holy Spirit – the fire of God’s love. We wear red vestments on Pentecost Sunday, for the Sacrament of Confirmation and on other Masses of the Holy Spirit. This is fitting; the word martyr means ‘witness’, and it is the Holy Spirit who gives us the courage to witness.

In my Latin class at school we learned the phrase:
sanguis martyrum semen Christianorum est: the blood of martyrs is the seed of Christians. It was written by the historian Tertullian more than 18 centuries ago, at a time when the Roman Empire was determined to stamp out the rapidly growing Christian faith. This era is often referred to as the Age of Martyrs, when the blood of Christians poured out red as thousands laid down their lives rather than renounce or compromise their faith in the midst of Pagan culture. But the blood of the martyrs turned out to be the seed of the Church. Far from destroying the faith through fear and intimidation, the cruelty of persecution magnified the powerful witness of these faithful believers. Under the guidance of the Holy Spirit, Christianity was renewing the face of the earth and nothing would stop it.

All that may seem a long time ago, but it is shocking to realise that in the twenty-first century, Christians continue to be persecuted, displaced, intimidated, tortured, and even executed on account of their faith. Places of worship are targeted by violence and destruction.

News of some of these attacks on Christians passes fleetingly across our TV screens – e.g. the twin attacks by IS which killed 47 Coptic Christians last Palm Sunday in Egypt. But sadly, much of this persecution continues without recognition, attention, or anything significant being done to prevent it. Various Christian groups work to highlight what is happening – like Open Doors and Aid to the Church in Need. This time last year representatives of different Christian traditions in Ireland gathered in Portlaoise to discuss the persecution of Christians at the 27th annual Irish Inter-Church Meeting. Afterwards they said:
“In the course of our reflections we were challenged, encouraged and inspired. We were challenged by the sheer scale of the suffering and the urgent need for a response from the international community, while recognising that the complexity of the problems do not lend themselves to obvious, externally–imposed solutions. We were encouraged to hear that our spiritual solidarity in prayer and pilgrimage means a great deal to those who are experiencing persecution, and that the work of Christian development organisations is helping those who have been displaced begin to rebuild their lives, in the hope of one day being able to return home. We were inspired and humbled by the courage of those who have risked everything to remain true to their faith. Their example gives us hope, when we might feel tempted towards resignation and despair”.

We agreed that, “as churches, we can play our part by keeping this issue on the agenda of our political leaders and ensuring that the victims of persecution are not forgotten, by making donations in support of the urgent humanitarian needs and by working to ensure that our society models the inclusive approach to minorities we would wish to see in the Middle East and throughout the world.” (Statement of 27th IICM 2017).

It was encouraging therefore to note that, earlier this year, the issue of persecution of Christians was discussed at debates in the Dáil and at Westminster in April and July this year.

On #RedWednesday, we are being invited once more to pause, reflect and raise awareness of this horrific reality in our world.

The recently published second report on Christians oppressed for their faith by Aid to the Church in Need: Persecuted and Forgotten 2015-2017, highlights some grim realities that might otherwise have remained hidden for many of us, including:
– The terrible life-threatening conditions for many Christians trying to live and believe in North Korea, Somalia, Afghanistan Pakistan and Sudan;
– The reality that in almost all the countries reviewed, the oppression and violence against Christians have increased since 2015;
– The impact of the displacement and exodus of Christians in countries like Iraq and Syria threatens to extinguish some of the oldest Christian presences in the world;
– The horrendous activities of Boko Haram in Nigeria whose genocide has led to the displacement of millions;
– The hostile treatment of Church communities in China, with widespread removal of crosses and demolition of church buildings;
– The “unspeakable atrocities” against Christians in North Korea.

The witness and martyrdom of so many persecuted Christians around the world challenges me this #RedWednesday to ask: what does their suffering mean for us? Surely it means more than simply lighting our churches red or wearing a red armband for the day? Let me offer three suggestions:

Firstly, the persecution of fellow Christians reminds us of the importance of reconciliation and peace building between Christians of different traditions – a lesson that is particularly important for Christians here in Ireland. Sadly, many people looking in at Ireland from outside, see a history of division and sectarianism, of intolerance, mutual recriminations, and open hostility within the Christian family – I repeat what I said last month: this is a source of scandal, and something which has dimmed the light of the Gospel. Reflecting on our persecuted brothers and sisters throughout the world should remind people of faith in the various Christian traditions on the island of Ireland, that we all share the responsibility of leading the way in transforming relationships and in healing the legacy and pain of our troubled past.

Secondly, the plight of persecuted Christians reminds us of the importance of advocating for freedom of conscience and religion which is enshrined in article 18 of the UN Declaration of Human Rights. We should all be concerned about the growing incidence of intolerance against Christians in many parts of the world and call on our Governments to do everything they can to prevent this persecution wherever and to whomever it happens. Governments have a responsibility to respect the fundamental right to freedom of conscience and religion of all their citizens, including (indeed particularly) when these citizens are a minority in their country. This is true whether these citizens are Christians or, for example, Muslim refugees in Myanmar or people of the minority Yazidi religion in northern Iraq.

Those who do not respect freedom of thought, conscience and religion must be held to account. We should call on our Governments, in these islands, to put on the agenda of their foreign policies, respect for the freedom to manifest religion or belief, whether in teaching, practice, worship or observance. The insistence that countries uphold this freedom should form an important part of decisions to allocate aid funding.

Thirdly, the martyrdom and witness of our fellow Christians invites us to consider how we ourselves witness to our faith in Irish society. Our wounded world needs so much to be healed and enlightened by the Gospel, and we are all called to be prophetic in shining the light and truth of the Gospel into some of the trickiest and most sensitive issues of our time.

Our call to witness compels us to courageously present in public discourse our sincerely held Christian convictions about the dignity of the person and the sacredness of all human life, about marriage and the family; about the widening gap between rich and poor and the need for solidarity and a fair distribution of goods in the world; about care for the Earth, our Common Home; about the need to build a society that is marked by peace, justice and care for all, especially the most vulnerable.

I thank God for the freedom of worship and religion that we enjoy on this island, a freedom that is denied so many people in our world today. I recognise that to be like Christ in an increasingly secularised world increasingly means being different, counter-cultural, and not easily swayed by the prevailing attitudes and opinions around us.

On this #RedWednesday I invite you to pray for the gift of courage, the grace of witness and loyalty to Christ for Christians all over the world and especially for those who continue to be challenged, attacked, displaced or even murdered for what they believe in.

• Archbishop Eamon Martin is Archbishop of Armagh and Primate of All Ireland.