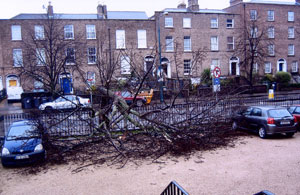 The tree fell down….

A wind was blowing Sunday morning, 6 February, as a number of the SMA Ranelagh community went about their pastoral duties. Luckily four of them had left the SMA House car park before ‘our big tree’ cracked and fell over the iron railings onto the very spot where, earlier, some of them had parked their cars.

On Thursday, 3 February, a young mother, Mrs Lynda Collins, was tragically killed when a tree fell on her as she walked home along Waterloo Road.
Fr Sean Hayes took these two photos shortly before the Dublin Corporation officials cleared the tree away. Thankfully no one was injured in this incident. The broken tree as seen from across the street