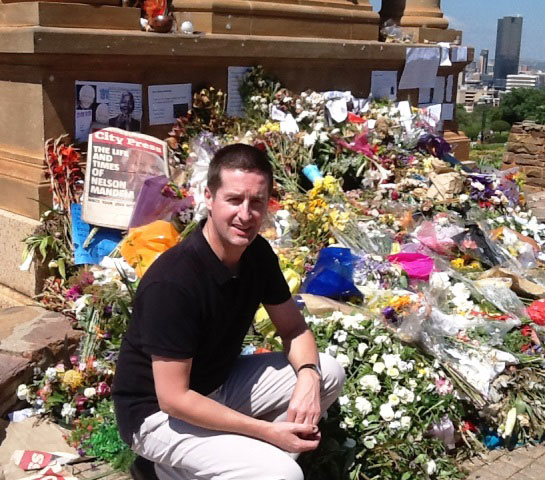 Fr Hugh Lagan and 50,000 others filed past the remains of the late Nelson Mandela on the third and final day of his lying in state. A further 50,000+ were unable to gain entry to the building where the body lay.

Nelson Mandela was born in 1918 and for most of his life suffered many forms of injustice because of the colour of his skin. But he eventually realised that the only way to change things, to seek true justice, was not to return evil for evil, but to reach out to those who persecuted him – and all other non-whites in South Africa – and build a country where all are treated equal, regardless of colour, race or creed. In his own words:

“If you want to make peace with your enemy, you have to work with yuor enemy. Then he becomes your partner. I have said, the first thing is to be honest with yourself… As I walked out the door to my freedom, I knew that if I didn’t leave my bitterness and hatred behind, I’d still be in prison.”

Over three days more than 100,000 South Africans and visitors from other countries filed past the coffin to pay their respects to one of the most iconic figures in the world.

The ‘Father of the Nation’ was viewed by ordinary South Africans, many of whom have yet to experience the peace and prosperity Mr Mandela sought.

The ‘great and the good’ also came to pay their respects, even if many among them would never ‘be fit to undo the strap of his sandals’. Many speeches were made, but the words sound hollow when one sees the squandering of riches in so many countries.

At the Regina Mundi Catholic Church in Soweto, where hundreds of people attended Mass, Father Sebastian Rossouw spoke of Mr Mandela as offering a guiding light for South Africa. “Mandiba did not doubt the light,” Fr Rossouw said, “he paved the way for a better future.“ In his own words, Mr Mandela said: “No one is born hating another person. Because of the colour of their skin, of their backgorund, of their religion. People learn to hate, and if they can learn to hate, they can be taught how to love.“

After ten days of official mourning the remains of a great Christian leader were laid to rest in Qunu, the village where he grew up and imbibed the Christian values he lived by for the rest of his life, especially during his persecution and imprisonment by the apartheid regime.