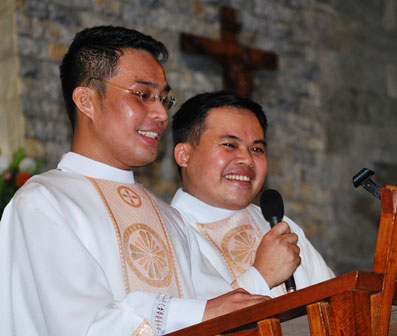 It was eight years since the last Permanent Commitment by a Filipino to the missionary life in the SMA. Fr. Bembolio de Los Santos was then ordained an SMA priest in 2007 but sadly died three years later. So the celebration at the SMA House of Formation, New Manila, on 25 October 2014, was all the more significant. It was a breath of new life and encouragement for the work of mission and the life of the SMA in the Philippines District-in-formation [PDF] after such a long absence of new members.

Gathered with the Cacao and Lumagbas families and the family of SMA priests and students, Wilmer Cacao and Cristopher Lumagbas pledged themselves to the Society of African Missions for the rest of their lives.

The Community Chapel was filled to capacity with a lovely blend of fervent prayer and well-rehearsed song from the student choir. It had truly an air of thankful celebration. The offertory was presented in liturgical dance to ‘Take Lord, Receive’, the third prayer of St Ignatius of Loyola. The various aspects of participation all added to a sense of collaboration as SMA members and laity danced with God in the living out of a shared mission.

It was an occasion of great encouragement for the SMA members who, despite their small number, have kept their missionary zeal alive over the years. The other twelve students were inspired to continue on their journey of discernment encouraged that perhaps, one day they too, will commit their lives to the work of God’s mission through the SMA. Wilmer and Chris await their Call to Ordination

The following day all roads led to the SMA Good Shepherd Parish at Las Pinas where SMA members have ministered since 1985. Since then many of the parishioners have become SMA Mission Partners, supporting the work of the SMA through their prayer and financial contributions. To host the Diaconate Ordination of two more SMA members was a great joy for those Mission Partners who have supported the missionary work for so long. Parishioners gathered from the seven chapels of the parish creating a great excitement and prayerful energy – all so grateful to God for the blessing of these two newly ordained missionaries for Africa. Most Rev Jesse E. Mercado, the Bishop of Paranaque, was the Principal Celebrant and ordained Cristopher and Wilmer to the Order of Deacon. The singing of the litany of the saints and the laying on of hands by the Bishop held special significance during the liturgical celebration and were very moving moments for the family members who looked on as their sons and brothers gave themselves freely in response to God’s call. After the Mass there was food for all as the celebration moved to the adjacent Parish Pastoral Centre. Having such a facility beside the Parish Church was such a gift and made the occasion flow so easily.

The gospel reading of the day spoke of loving God and loving ones neighbour. Certainly in SMA House of Formation and in SMA Parish on 25 and 26 October 2014 there was a great awareness of being loved by God and a generous reaching out in love to all who joined in this weekend of SMA celebration.

edited from a letter written by Fr Damian Bresnahan SMA