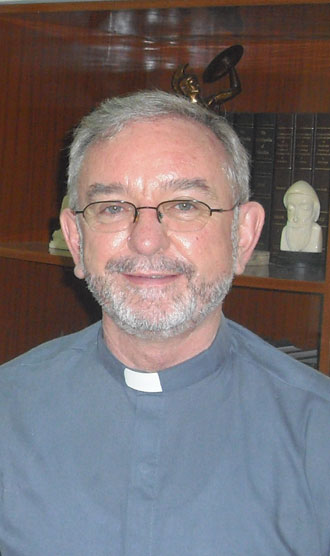 Sunday, 29 August 2010, was an historic day for the Irish Province of the Society of African Missions (SMA). Many Irish SMA priests have been called to serve the Church as bishops in Africa. Today was the first time an Irish SMA was ordained to serve as a bishop in the Church in Ireland when Fr Kieran O’Reilly SMA takes over from Bishop Willie Walsh as Bishop of Killaloe. Archbishop Dermot Clifford of Cashel, Bishop Walsh and Bishop Noel O’Regan SMA were the principal ordaining bishops.

More than 1,000 people participated in the ceremony at the Saints Peter & Paul Cathedral in Ennis, beginning at 3pm. The ceremony was streamed live on the local Radio station, Clare FM.

The homilist was Fr Tim Cullinane SMA, the Regional Superior for the SMA team in western Nigeria. He illustrated his homily with several stories which reflected the style he learned during his 40+ missionary service in Nigeria. Click here for his homily.

At the close of the two and a half hour ceremony the new Bishop addressed the congregation as well as those listening via the Internet. His words of Thanks to his predecessor, Bishop Willie Walsh, drew sustained applause and a standing ovation, such is the esteem in which Bishop Willie is held. Bishop Kieran – the first bishop to carry the name Kieran as was pointed out to us by Archbishop Clifford in his opening remarks – also expressed his desire to work closely with the members of the different churches in areas of common concern and witness. He also highlighted the richness of faith which has come to Ireland through the arrival of people from all over the world. Bishop O’Reilly’s remarks. The eloquent words written in the Ennis Parish Newsletter for this Sunday expresses well the welcome the former SMA Superior General can expect:

“Today, the Diocese of Killaloe opens the door of its heart in welcome to Fr. Kieran O’Reilly SMA, who will be ordained as our new Bishop. In welcoming the new Bishop, we also say a fond farewell to Bishop Willie Walsh, whose well earned retirement officially begins today.

Fr. Kieran and Bishop Willie are in our thoughts and prayers on this special day. We thank Bishop Willie for being our Bishop for the past sixteen years. He touched the lives of many and did not spare himself in terms of hard work and dedication to his job.

Equally, we thank Kieran O’Reilly for accepting the position of Bishop of Killaloe. We pray God to continue his courage to enable him bring his unique leadership skills to the Diocese of Killaloe. We look to Bishop Kieran to exercise his vision of Church and Diocese. There is justifiable confidence that his vast experience of leadership and the missionary life to date, will give him a great head start as Bishop. He will bring to Killaloe a sense of the wider world Church, through an awareness of and respect for people of all Faiths. Our lives cannot but be enriched as a result.

Today is a day of joy for Kieran O’Reilly, his parents and family. We all share in this moment as he becomes part of the bigger family that is the Diocese of Killaloe.

We wish him well as he assumes the role of Shepherd – Bishop. May he find happiness and fulfilment in the coming years.”

Pictured below is Fr Jean-Marie Guillaume SMA who takes over the role of SMA Superior General until the next SMA General Assembly in 2013. He, with the members of his Council (Frs Paul Saa-Dade Ennin and Tim Wright) as well as Society leaders from France, Holland, Italy, India, Nigeria, Philippines and Spain also attended the ceremony. Bishop Willie Walsh welcomed the appointment of Fr Kieran as bishop of Killaloe and said: “I warmly welcome the appointment of Fr Kieran O’Reilly as bishop elect of our diocese of Killaloe and extend to him a céad mile fáilte on behalf of all the people of our Diocese. … Fr Kieran takes on the role of Bishop at a difficult time for the church in Ireland. However it is an opportune time for a new evangelisation in our Irish church. The appointment of a priest from a Society whose priority is evangelisation may be quite providential. It is my hope and prayer that his particular experience of evangelisation in a younger African Church will bring new life and rejuvenation to an older Irish Church.

In addressing the role of his own Missionary Society, Fr Kieran recently said ‘Issues of Justice, Peace and the integrity of the created world in which we live are now at the centre of the Mission agenda. It is a difficult and unrewarding task in our times to uphold such issues but to do so is firmly rooted in the conviction that Jesus Christ, in his saving mission, has given dignity and worth to each and every human being. This is the fundamental cornerstone on which we engage in mission today.’

I am confident that such sentiments are equally applicable to the lives of all of us in Killaloe Diocese.

I pray God’s blessing on him and on all the people of the Diocese.”

SMA priests representing the many different countries where we come from and where we are on mission joined with the people and clergy of the diocese for the Ordination ceremony. Archbishop Felix Alaba Job, President of the Nigerian Episcopal Conference and two other Nigerian Bishops – Rt Rev Alfred Martins of Abeokuta and Gabriel Abengunrin of Osogbo participated. Also attending were Archbishop Michel Cartateguy SMA, the Archbishop of Niamey, Niger, Bishop Jean Bonfils SMA, emeritus bishop of Nice and Monsignor Chris Brennan SMA, Apostolic Administrator of Gbarnga diocese, Liberia. Several Nigerian clergy, some of whom were students of the new bishop when he taught Scripture in the Ss Peter & Paul Major Seminary in Ibadan, have travelled from Nigeria, Rome and the USA. Later in the day, Archbishop Job reminded us that when Father Kieran taught Scripture in Ibadan it was at the Ss Peter & Paul Major seminary. And today Fr Kieran was ordained a bishop in a Cathedral dedicated to the same two Apostles.

Among the SMA priests participating was Fr Kieran’s successor as Superior General, Fr Jean-Marie Guillaume with the two other members of the SMA General Council, Frs Paul Ennin and Tom Wright. Two former Superiors General, Frs Joe Hardy and Daniel Cardot, came from France for the celebration. During his time as Superior General, Fr Kieran continued the development of the African part of the Society (begun by Fr Joe Hardy). Fr Basil Soyoye SMA (from Nigeria) represented the 150+ African SMA priests, who come from 12 different African countries.

A Céad Míle Fáilte was also extended to the SMA priests, religious and SMA Lay Associates coming from France, Holland, India, Italy, Poland and Spain. The Irish Provincial Leader, Fr Fachtna O’Driscoll  and a classmate of Fr Kieran’s – Fr Jarlath Walsh who is the SMA General Bursar – accompanied Fr Kieran to the Altar.

Since 1960 the SMA has a programme for Sponsoring the training of seminarians – the Family Vocations Crusade. Groups of people from all over the country donate a certain sum each year for a period of eight years to help defray the costs in the seminary. Among the Killaloe faithful gathered in the Cathedral today to witness Fr Kieran’s Ordination as bishop are several women and men who sponsored his training for the priesthood. They include Nita Enright (from Quin), Tess Delahunty and Lena Hanrahan (from Feakle). It is a proud day for them too as they see a priest they sponsored for missionary priesthood ‘returning’ to them as their bishop.

We, his SMA family, assure him and his new family in the diocese of Killaloe of our prayers that together they may be a light to the nations.

On the left side are the arms of the Diocese of Killaloe and, on the right side, the personal coat of arms chosen by Kieran. The arms of the diocese consist of a latin cross between four trefoils with the key occupying the chief position. The arms speak of the guardianship of Christ’s Kingdom, with special reference to Peter.

The personal arms of the Bishop-elect reflect his love of Sacred Scripture and his new role as Bishop of Killaloe.

The open Bible with the symbols of the A and Ω reminding us of Christ, the beginning and end of all we do.
The sword refers to St Paul’s Letter to the Ephesians 6:17: And then you must take salvation as your helmet and the sword of the Spirit, that is, the Word of God.
The fish is an ancient Christian symbol. Here it recalls the bodies of water – the Atlantic Ocean, Lough Derg and the Shannon River which are all part of the diocese of Killaloe.

The motto Verbum Tuum Veritas (Your Word is Truth) chosen by Kieran is taken from John 17:17 and is a further sign of the new Bishop’s love for Sacred Scripture and expresses his confidence in the promises of Jesus for His Church.