“God bless Leigh Day, the London-based legal firm that is fighting for the Nigerian communities! Its motto reads, “We act for the vulnerable”, and it acted for the Ogale and Bodo communities of the Niger Delta on the strength of an email from a village fisherman some years back.”

In the early 1990s Shell began to face protests over its oil operations in Nigeria. In 1994 the Movement for the Survival of the Ogoni People, then led by Ken Saro-Wiwa, began blockading contractors working on Shell’s facilities to bring attention to the large number of pipeline ruptures, gas flaring and other forms of contamination that were occurring in the Ogoniland region. The group described Shell’s operations as “environmental terrorism.”

At the heart of that struggle, offering support, encouragement and advice to communities most affected by the environmental carnage was a courageous Irish woman, Sr. Majella McCarron, OLA, whose fearlessness and tenacity won her the respect of many in the international human rights community.

The Nigerian government, a partner with Shell in the operations, responded to the protests with a wave of repression, including the arrest of a friend of Sr. Majella, Ken Saro-Wiwa, who was hanged in 1995. Shell denied it was involved, but critics pointed to the role played by the company in supporting the military dictatorship. 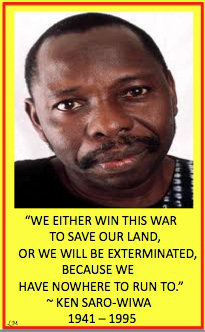 A lawsuit charging Royal Dutch Shell with human rights violations in Nigeria was later filed in a U.S. federal court under the Alien Tort Claims Act. In 2009, just before a trial was set to begin, the company announced that as a “humanitarian gesture” it would pay $15.5 million to the plaintiffs to settle the case.

A 2011 report released by the United Nations Environment Program estimated that a clean-up of oil industry contamination in Ogoniland would cost at least $1 billion and take up to 30 years. Shell’s “humanitarian gesture”, therefore, fell well short of what was required.

On Wednesday, February 14, 2018, the Examiner reported that Shell had defeated “the latest legal bid by thousands of Nigerians to have their damages claims over pollution dealt with by the English courts”.

In 2017 Mr Justice Fraser ruled that compensation actions by two Nigerian communities affected by oil spills would have to be heard in Nigeria. Consequently, the communities took their action to the Court of Appeal. On St Valentine’s Day 2018 the British Court of Appeal upheld Fraser’s ruling by dismissing their appeal by a majority of two to one.

One of the actions had been brought on behalf of the Ogale Community in Ogoniland, which consists of around 40,000 people.

The other relates to more than 2,000 individuals from the Bille Kingdom of Nigeria, who are mostly fishermen.

They believe they can only get “justice” in the UK over what their lawyers have described as “extensive environmental damage caused by oil pollution”.

Royal Dutch Shell (RDS), which is incorporated in the UK and is the parent company of the Shell group of companies, and its subsidiary, the Shell Petroleum Development Company of Nigeria (SPDC), argued that claims should be heard by the courts in Nigeria.

After the High Court ruling in January last year, His Royal Highness Emere Godwin Bebe Okpabi, tribal king of the Ogale community, said: “There is no hope of justice in the Nigerian courts.”

Sir Geoffrey Vos, who dismissed the Court of Appeal challenge by the communities along with Lord Justice Simon, said the High Court judge was right to hold that “the claimants’ claims against RDS were bound to fail because it was not arguable that RDS owed them a duty of care”.

He pointed out that “the fact that none of the judgments in this case dwell upon the underlying facts of the claims should not be taken as any depreciation of their gravity”.

He added: “The severe pollution caused by the repeated large oil spills in respect of which these claims are made has impacted the lives, health and local environment of some 50,000 people forming part of the communities in the Niger Delta represented by the appellants.”

He continued: “Despite the gravity of the public health situation and the fact that clean-up operations are still incomplete, it is necessary for this court to focus on the legal foundation of the claims against the anchor first defendant, Royal Dutch Shell plc.

“If those claims cannot be shown to have a real prospect of success, jurisdiction cannot be established in England and Wales and none of the claims can proceed.”

Lord Justice Sales allowed the appeal, saying that in his opinion the claimants were entitled to sue RDS “in this jurisdiction”.

Responding to the latest developments in this torturous and distressing campaign for environmental justice and integrity, Sr. Majella McCarron, OLA, stated:

“God bless Leigh Day, the London-based legal firm that is fighting for the Nigerian communities! Its motto reads, “We act for the vulnerable”, and it acted for the Ogale and Bodo communities of the Niger Delta on the strength of an email from a village fisherman some years back.

There is a photo of senior partner Martyn Day addressing the community in Bodo village square when Royal Dutch Shell ‘settled’ by raising pollution compensation in 2016 from £4000 to £55,000,000 four months before facing the High Court in London.

The High Court threw out the present Ogale case being heard in London this week. Leigh Day is on its way with an appeal to the Supreme Court. There is no argument anymore about the intense pollution of the Niger Delta scientifically proven by UNEP in 2011; ironically, Ogale was one of the test sites. The legal argument is about jurisdiction as the parent company is in Europe – UK and the Netherlands.

That is how Leigh Day responds wherever it is called to enter situations of acute injustice traceable to British multinationals such as Royal Dutch Shell, incidentally listed among the eight worst polluters in Ireland by the Environmental Protection Agency in January 2018.

Leigh Day has taken similar cases in South Africa, Tanzania, Ivory Coast …Meanwhile Maura Harrington of Shell to Sea spent four days this week in the High Court legally representing herself in a challenge to the integrity of the consent process carried on by the State and Royal Dutch Shell in approving the Corrib Gas Pipeline, a project objected to by the local community over 17 years.

Amnesty International London began a case in November 2017 against Royal Dutch Shell over deaths during Ogoni protests in the early nineties and a widow of one of the Ogoni Nine, Esher Kiobel, has a case on the hanging of her husband before a Dutch Court supported by Friends of the Earth. Royal Dutch Shell ‘settled ‘ a court case in the USA with the Wiwa and some others of the Ogoni Nine to the tune of $15,000,000.”

Sr. Majella is a human rights defender who has fearlessly championed the cause of the people of Nigeria who have suffered intimidation, murder, health issues and the detrimental impact of oil pollution on their livelihoods.