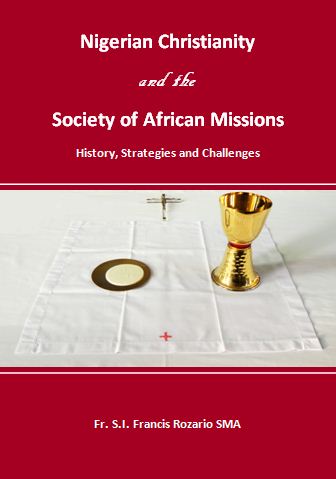 The first members of the Society of African Missions (SMA) arrived in western Nigeria just over 150 years ago. Since then they have evangelized vast swathes of this great country (the largest by population on the African continent), from Badagry, in the extreme south west, north to Kano and east to Asaba.

Such has been the blessing of God on their work that today there are Nigerian SMA priests on mission in many other African countries and beyond.

As part of the celebrations of this milestone Fr Francis Rozario, an Indian SMA priest, has published this timely work which treats of the history of Christianity in Nigeria over the last 600+ years:

Fr Rozario’s book not only relates the history of this period but also seeks to analyze the strategies used by the different missionary groups and the challenges they face today.

Among the topics he seeks to address are:

Fr Rozario’s work is a trail blazer as it is the first work by an SMA to be available on digital form. It is also available in print form, for those who prefer to hold a book in their hands.

Click here for full details on how to purchase it through Amazon UK. You may be able to have FREE Super Saver delivery.

Note about the author: Fr Francis Rozario is a priest of the Society of African Missions. He is a member of the Indian District-in-formation. He comes from Tamil Nadu, S India and began studies with the Society in 1992 at the SMA House in Mangadu, near Chennai. He completed his Philosophy studies at Arulanandar College, Madurai which is under the care of the Society of Jesus (Jesuits).
For his Stage (Pastoral Year) in Africa he was assigned to the SMA team in Egypt.
Following this he was assigned to the SMA Formation House in Cote d’Ivoire where he took his permanent oath of membership in 2002, followed by ordination as a priest in 2003. He is the 19th Indian SMA priest and was ordained by Bishop Singarayan in Salem, his home town.
After ordination his first appointment as a priest was to the Apostolic Vicariate of Kontagora in Nigeria where he worked with Fr. Patrikson Francis in New Bussa parish and then alone in Agwara parish.
In 2006, recognized for his intellectual capacities, he undertook Further Studies in Scripture at the Pontifical Bibilical Institute in Rome from where he graduated in 2010 with an LSS (Licence in Sacred Scriptures).
Fr Rozario returned to Nigeria to join the Formation team at the SMA House of Studies in Ibadan, where seminarians seeking to be SMA missionary priests are trained.
He is also a member of the teaching staff at the Ss Peter & Paul Major seminary where about 700 seminarians from various dioceses and congregations study.