The World Health Organization predicts that between 2030-2050, climate change will cause an additional 250,000 deaths a year from malnutrition, malaria, diarrhea, and heat stress brought on by additional climate change.

“The urgency to act cannot be ignored.”

While this June marks the first anniversary of President Trump officially pulling the United States out of the Paris climate agreement, many American Catholics prefer to celebrate this month as the third anniversary of Pope Francis’ encyclical Laudato Si’.

And in light of both anniversaries, American Catholic leaders held a telephone press conference on June 18 to reaffirm the importance of Laudato Si’.

They highlighted that nearly 600 Catholic institutions have signed the Catholic Climate Declaration, and urged more Catholics in the U.S. to get involved in the dialog and “actions needed to protect our common home.”

Soon after Trump withdrew the country from the Paris Agreement — an action the U.S. bishops called “deeply troubling” — many mayors, county executives, governors, tribal leaders, college and university leaders, businesses, faith groups, and investors across the U.S. joined forces to declare that “We Are Still In.” 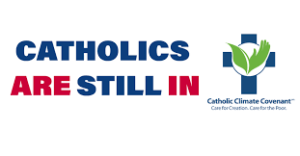 They made a commitment to continue supporting climate action to meet the Paris Agreement, despite any action by the U.S. government. Catholic groups, wanting to speak from a faith perspective, prepared the U.S. Catholic Climate Declaration to say that they, too, “Are Still In.”

Misleh said that the Catholic Climate Declaration “is an unprecedented effort to step into the void left by President Trump’s decision to withdraw from the Paris Agreement — an action Misleh labeled shameful.

“It is shameful,” he said, “for the U.S. to be the only country to announce its intentions to withdraw from the global dialog and plan of action among the community of nations.”
In response to Trump’s actions, and the subsequent “We Are Still In” movement, Misleh said that the nearly 600 Catholic groups that have signed the Catholic Climate Declaration include archdioceses and dioceses, colleges and universities, and both female and male religious communities.

So far, 128 parishes have signed the declaration, a number Misleh hopes to see rise in the months ahead.

The speakers at the press conference gave some examples of the way Catholics are expressing their commitments.

For example, she said, “Congregations of women religious are using their investment funds to promote change. Many have removed fossil fuels from their funds while keeping a small investment in fossil fuel companies to enable them to engage those companies in dialog.”
Two congregations, she said, “the Sisters of the Presentation of the Blessed Virgin Mary and the School Sisters of Notre Dame, used shareholder resolutions this year to spur two Midwest electric firms to publish a climate risk assessment and to continue to dialogue with investors about climate change.”

While pressuring corporations to change their policies about fossil fuels, “congregations and sisters are taking action to reduce their own carbon footprint” she said. As an example, she pointed to the sisters of the Holy Cross, who have established a carbon footprint fund to support carbon reduction projects.

“The sisters calculate their own carbon footprints produced through their own travel and donate an offsetting amount to the fund,” she said.
The projects the sisters have funded “include solar power at schools, convents, and hostels in Bangladesh and India, planting of over 1,800 trees in Uganda, and energy efficient lighting for a Catholic College in the United States.”

In another example, she spoke of the Adrian Dominicans in Michigan, who now power all the electrical needs on their 130-acre motherhouse campus with 100 percent renewal energy

“Climate change,” said Sister Wagner, “presents us with a moral crisis and a moral question. We must each ask ourselves what our response will be. The response of the more than 190 congregations of women and men religious who have signed the Declaration is clear: “We Are Still In!”

Hendrickson said, “I’m very proud to sign the Catholic Declaration as president of a Catholic university.” Many colleges and universities, he said, are making substantial progress in reducing their carbon footprint and in increasing programs on combating climate change on both the individual and structural levels.

While speaking of how Catholic healthcare institutions are working to reduce their carbon footprint, Rachelle Reyes Wenger spoke most forcefully of climate change and environmental degradation as a public health issue — and as a life issue — that takes a disproportionately heavy toll on the youngest and oldest and poorest among us.

The World Health Organization, she said, predicts that between 2030-2050, climate change will cause an additional 250,000 deaths a year from malnutrition, malaria, diarrhea, and heat stress brought on by additional climate change. “The urgency to act,” she said, “cannot be ignored.”

Bishop Pates spoke of the U.S. bishops’ commitment to Laudato Si’ and to the Catholic Climate Covenant. He urged President Trump to reconsider the US withdrawal from the Paris Agreement. Institutions and individuals can make a difference, he said, but “the United States as a powerful government and the reach it has would be much more effective.”

But even without a reversal by the Trump administration, Bishop Pates said Catholics “can still make a difference on two levels, the institutional and the personal,” and he urged American Catholics to get involved in both ways.