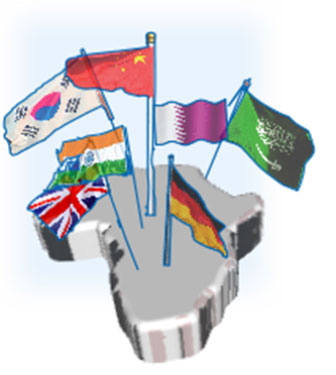 Since 2007 land three times greater than the area of Ireland has been snapped up by foreign investors to establish “mega-farms” in Africa.  Negotiations for as much again are in progress.  While many African governments welcome this investment, international agencies, NGO’s and local people are less enthusiastic.  Some see land-lease as a “land-grab” differing from 19th-century colonialism only by involving different land-grabbers. The 2009 UN Report “Land grab or development opportunity” diplomatically states that foreign investment “could be good news if the objectives of the land purchasers are reconciled with the investment needs of the (host) countries.”  Less diplomatically this means land lease has not yet brought the responsible investment in agriculture that Africa needs.

Land Lease Facts:  Gulf States, China, South Korea and India have leased huge tracts of African land. Biofuel companies from the UK, Germany, Sweden and other European countries have also invested, on a lesser scale. Land is leased for periods up to 99 years to grow rice, maize, sugar cane, fruit and vegetables and biofuel crops such as palm-oil and jatropha.

Land lease projects exist in at least 17 African countries – five of them where Irish SMA’s work. While foreign investment in African land is not new what is different now is the scale and the fact that leases are between Governments or large corporations rather than companies. Past investment helped the local economies through trade and employment. A current lease in Mozambique allows 10,000 Chinese workers produce crops for export to China, cutting out any local benefit.

Land lease became an issue in 2008 when the price of staple foods doubled.  Fearing their vulnerability wealthy, but land-poor, countries like Saudi Arabia, Kuwait and Qatar poured millions of dollars into long-term leases in order to ensure future food security. Changes in eating habits resulting from improved economies in China, South Korea and India also led to greater demand for farmland. Added to this came the booming demand for biofuel. Together, these three factors led to an increased demand for farmland.  As farmland in Africa is abundant and comparatively the cheapest in the world it is the most attractive to investors. Roughly twenty foreign nations now lease land in Africa. Secrecy around land deals is common – nobody knows exactly how much has been leased and information regarding the terms is either vague or unknown. Land lease farming has brought significant employment in some places but in others workers have been brought in from the outside. In some countries e.g. in Zambia, produce does enter local markets benefitting local people, however in most places produce is for export. Benefit in terms of infrastructure development has been patchy and even where this has happened, for example in building roads; little provision has been made for maintenance.

One thing is clear, so far benefits to Africans are not in proportion to those accruing to leaseholders – Africans are getting the short end of the stick.