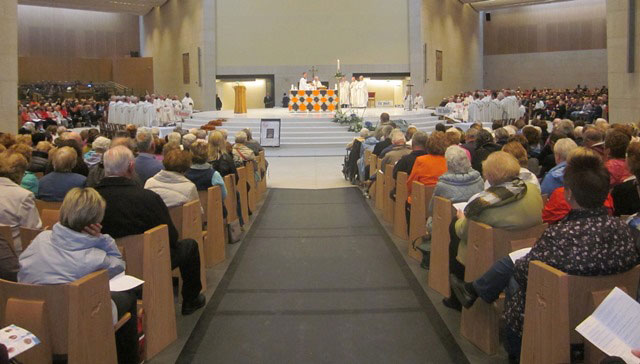 The annual SMA pilgrimage to Knock took place, as usual, on the 4th Saturday in May. Though a dull day weatherwise the day was dry until just before we left the Basilica after the Mass. About 2,000 pilgrims gathered in the ‘under renovation’ Basilica for the closing Mass of our annual SMA Novena in honour of Our Lady. Fathers Gerry Sweeney SMA and Fr Mattie O’Connell SMA were among the concelebrating priests at the Mass.

Pilgrims and clergy alike found the ‘new’ sanctuary much more welcoming and bright and less ‘overpowering’ than the former one. When it is completed the Basilica will surely be a much more congregation-friendly place than heretofore.

The principal celebrant was the SMA Provincial Leader, Fr Michael McCabe, assisted by the retired Bishops of Paisley, John Mone and of Lancaster, Patrick O’Donoghue as well as two of the Family Vocations Directors [FVC] Directors: Fathers John Bowe and Lee Cahill. Fifty SMA priests concelebrated along with other visiting clergy.

Fathers Angelo Lafferty and Paddy O’Rourke were Cantors and the Clara Parish choir led the singing on hymns during the ceremony. Their music and singing was greatly appreciated by all.

The students from the Loreto House Formation programme once again enlivened our Liturgy with their carrying of the Bible to the Ambo for the proclamation of the Gospel.

The homily was preached by Fr Mossie Kelleher SMA who began by speaking of what Knock meant to his parents who, from their home in west Cork, made an annual pilgrimage to Our Lady’s Shrine. Our picture shows Fr Mossie with some of the concelebrating priests and the Clara parish choir.

The Offertory Procession incorporated dancers from the Corrib School of Irish Dancing – www.corribschool.com – from Claregalway and surrounding areas. The School, which is affiliated with Comhdháil na Múinteoirí le Rincí Gaelacha Teoranta, was established in 2011 and competes successfully at local, national and international levels. Dancers ranging in age from 5 to 18 performed a routine symbolising the inexorable progression of the seasons, focusing on celebrating the joyous reawakening and renewal of life each Spring.  These dancers represented the themes of the Pilgrimage in a unique and colourful way. They spread out right around the base of the sanctuary so that all pilgrims could see their presentation. Our picture shows some of the dancers along with some parents who carried the different symbols and the bread and wine to the Altar at the Offertory time. As is normal on such special occasions the Sacrament of the Sick was offered to the many sick pilgrims and those of advancing years.

A welcome change from previous years was that those who wishes to receive the Sacrament came to the front of each ‘chapel’ where priests were waiting to anoint them [see photo]. Those in wheelchairs or too infirm to come to the front were ministered to by priests designated for that task.

The same was repeated for the distribution of Holy Communion. It was much more dignified and reverent than former years when priests had to reach across to anoint or give a pilgrim the Sacred Host.

Before the Final Blessing the Novena Prayers were recited, bringing to a close the 35th SMA pilgrimage to Knock. The beautiful hymn – Lady of Knock – was sung by the choir with the congregation joining in for each chorus to sing out in praise of Our Lady, Queen of Ireland, Queen of Apostles, Queen of the Missions.

Sadly the rain made most pilgrims ‘head for the buses’ at a fast pace and so the time to have a chat with SMA priests they saw during the Mass was curtailed.

Some of the pilgrims had remarks to make about the day, some finding the outdoor Procession too long. Others said they appreciated that there were plenty of priests hearing Confessions and they didn’t have to wait long for their turn. Fr Mossie’s preaching was praised, especially for his ‘down to earth’ style and – very important – it wasn’t too long! Well done Fr Mossie.

Outside the Basilica the SMA Laity and Justice departments reminded us about the pressing issue of Climate change and invited everyone to ‘make their mark’ – a thumbprint – signifying their intention to do some practical things to show respect for our planet and help make it better for future generations.

Things you can do: