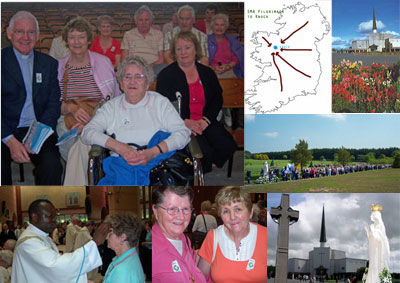 The annual SMA Pilgrimage to Our Lady’s Shrine at Knock took place in glorious sunshine on Saturday, 22 May 2010.
More than 2,000 SMA supporters as well as SMA priests, brothers and family members gathered for the final day of the SMA National Novena in honour of Our Lady. The family of Fr Colm Nilan (Kinvara, Co Galway) were among the pilgrims. Fr Colm worked for 28 years in Ghana before transferring to Ibadan, Nigeria where he is the Spiritual Director at the SMA Formation House, Bodija, Ibadan. There are more than 40 SMA seminarians in Bodija and they attend the SS Peter & Paul Major seminary nearby for classes in Philosphopy and Theology. They come from several African countries. The Superior of the Formation House is Fr Paul Amegashie SMA from Lomé, Togo.

Pilgrims came from the four corners of Ireland and further afield. Fr Damian Bresnahan and the five FVC Directors (Frs John Bowe, Lee Cahill, Brendan Dunning, Tommy Faherty and Sean Hayes) put a lot of effort into the preparations for the Pilgrimage and it was wonderful to see so many of our FVC members arriving in Coaches, Minibuses and cars. An event not to be missed in 2011!

Fr Basil Soyoye SMA (Superior of the Bight of Benin District-in-formation, pictured left) carried one of the banners during the Rosary Procession.
Over 50 SMA priests concelebrated the Mass at 3pm, led in prayer by Fr Fachtna O’Driscoll SMA, our Provincial Leader. They included some of our missionaries who are home on holidays – Frs Frank Diamond and John Gallagher (home from Tanzania), Fr Pauric Kelly (Zambia), Fr Val Hynes (Nigeria), Fr Mattie McNeely (Egypt). Fr Edward Muge SMA, from Nigeria was also among the concelebrants along with several African diocesan priests.
The well-known singer, Dominic Kirwan led the singing at the Mass, accompanied by his wife Louise. During the Mass, the Rite of Anointing of the Sick was celebrated for those who came forward for it.
The Missionary Sisters of Our Lady of Apostles (OLA) whose feastday it was also participated in the Pilgrimage.
When the time came for the Offertory Procession, a number of African Sisters and lay people brought the gifts to the Altar. Their beautiful singing and reverential dancing was greatly appreciated by all at the Mass. So much so, that Fr Richard, the MC for the Mass, invited them to come along to the Masses on Pentecost Sunday so that the local church community at Knock would see a different way to celebrate a particular part of the Mass. Fr Michael Brady SMA is home on holidays from his parish in the diocese of Rustenburg, South Africa. He is pictured here with the Mother General of the Sisters of Saint Brigid, Sister Cecilia Mkhonto. Maureen Messitt, Peg Coyle and Kay Larkin came from Shankhill, Co Dublin to join in the Pilgrimage to Knock..