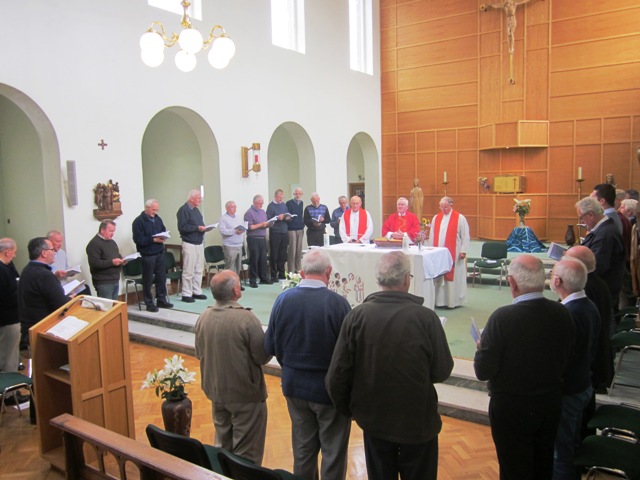 Tuesday – Thursday of the first week of the Assembly was taken up with further presentations and discussions, in Working groups and general sessions, about what future the delegates see for the Province.

Fr Michael McCabe leads the Eucharist during the first week, feast of St Tomas, the Apostle. Each evening the Steering Committee meets to review the work of the day, plan the coming work and take note of suggestions / comments coming from delegates relating to the Assembly.

Our ‘paperless’ Assembly demands the use of modern technology with documents interchanged through the ‘cloud’. Maurice Henry handles the expertise for his group.

On Tuesday, discussions focused on the Report on the State of the Irish Province under several headings, presented by either John Dunne or Damian Bresnahan: Mission, Laity, JPIC, Leadership, Living life, Other ministries. After every two presentations, the Working groups (WG) discussed the topics and gave a feedback in plenary session.

Three further presentations were made: Joe Egan (SMA Mission 2013), Sean Healy (A challenging world) and Michael McCabe (The context of our mission today). These too generated a lot of discussion and, with the Province Report, helped set the context for the delegates as they began work on drawing up a Statement on Mission for the coming years. The Statement aims to say what is uniquely ‘SMA’ which will inspire and attract people to come with us on our journey. Coming up with an agreed Statement will demand that one ‘lets go’ of some of ‘my views’.

Wednesday saw the first drafts from each WG produced. These were then responded to by the other WGs and a further draft produced. That evening Michael McCabe and Joe Egan were tasked with drawing all the different strands together and produce the Assembly First draft on Mission which would be examined by all on Thursday.

Thursday saw Fr Malachy Flanagan and Paul Murphy present a Report on their work in the Office of the Provincial Bursar. In the discussion afterwards appreciation was expressed for the massive support we receive from the people of Ireland and to our members who travel the country on ‘promotion work’ and the staff in our various houses.

It was noted that the Provincial accounts etc are fully audited and managed in accordance with all the requirements of law. John Dunne reminded each delegate to join in praying for our benefactors, as is done in our houses each day. We then returned to the Mission Statement and the rest of the day was spent in continuing the exchanges on this. The Assembly concluded its work on this matter and handed it back to Joe Egan and Michael McCabe to produce a 2nd draft.

Fr Damian and Fr Seamus enjoy a coffee break and a chance to catch up on the sporting life.

During the first session on Friday this 2nd draft was presented and discussed. The rest of Friday was given over to preparing to elect a Provincial Leader, one of the principal purposes of an Assembly. Delegates had already received the result of the Provincial Consultation for Leader. After a Reflection period (both in plenary session and privately) the 27 delegates met to conduct the election.

The Assembly elected Fr Michael McCabe. Tom Curran, Assembly Secretary, was sent to seek the approval of the Superior General and Council for this result and once this was received Michael McCabe assumed office as Provincial Leader.

In a brief address, Michael accepted the role entrusted to him and assured everyone he would do his best to fulfil it, with the help of his Councillors (to be elected next week). He was surprised to be chosen for this role but accepted that the Holy Spirit often springs surprises when people least expect it.

The Assembly adjourned until Monday morning at 7.45am for Lectio Divina.