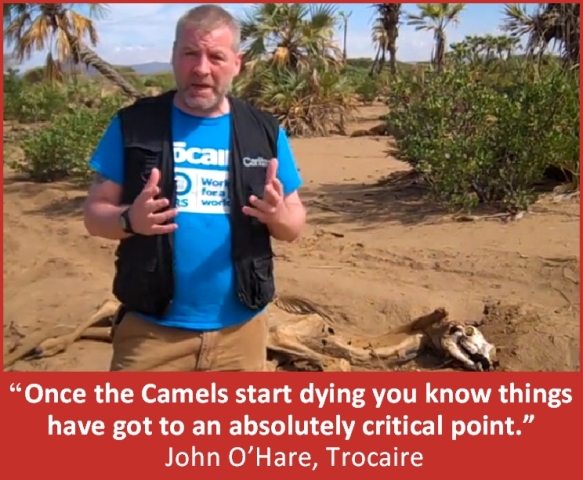 FAMINE IN EAST AFRICA
Parts of South Sudan are already in famine whileareas of northern Kenya and southern Ethiopia are in the midst of prolonged drought resulting in severe food and water shortages.

Crops and animals have died, leaving people unable to provide for themselves. Over ten million people in Kenya and Ethiopia are in need of urgent food aid. In Somalia millions more are hungry. A decade of war and instability has displaced millions and made it impossible for families to live safe and healthy lives. This suffering has been made worse by consecutive seasons of poor rainfall over the last two years. Somalia is now on the brink of another famine. 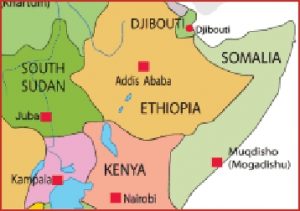 Most people in the region are solely dependent on the land for their livelihoods. As a result the combined effects of conflict displacement and drought have been devastating.
● In Somalia over 1.4 million children face life-threatening severe malnutrition this year.
● Over 4.5 million people are estimated to be in need of water.
● This situation has contributed to an outbreak of cholera, with 36,000 cases and over 700 deaths.
● 6.2 million people are in need of urgent humanitarian assistance, including an estimated 3.7 million children
● In South Sudan more than seven million people – over half the population of the country – are in need of urgent aid due to conflict and drought.
● In Ethiopia, during the second half of 2017, over nine million people will not have access to safe drinking water.
● In Kenya more than three million need food aid urgently. This is expected to rise to approximately four million within a few months.
● In Turkana, Kenya malnutrition rates of 30 per cent exist – twice the level considered critical by the World Health Organisation. More than half of the children screened were found to be acutely malnourished.
● 500,000 children face malnutrition in northern Kenyan due to drought.
● Approximately 30,000 families have migrated from Turkana to neighbouring Uganda as a result of the drought.

Practical Responses
Ben and Annie Janssen are Catholic Dutch Lay Missionaries who worked in Turkana, Diocese of Lodwar in northern Kenya for almost twenty years. Although now retired and living in the Netherlands, they still visit annually. Through the Foundation which they established, they assist and stay in touch with the projects they helped to begin and work with for many years. In a report circulated in May 2017 they speak of the impact that drought and famine is making on the lives of the people.  During their six-week-long stay they visited projects for Deaf Children, the Elderly and Children with Disabilities. They also visited a rural parish.

“Our first experience on arrival was the intense heat. In the afternoon it reached 39.5 Celsius in the shade. At night time it was not much cooler. Because of the severe drought the situation in the North of Kenya is very bad. Above all in the areas outside Lodwar, its effects are clearly visible. The rains did not come and food is very scarce. This is a great burden for older sick and disabled people that is added to by the shortage of water.”

In their report they go on to describe the current practice of Government and NGO agencies providing cash rather than food aid, so that people can buy food locally “Daily there are long queues at cash distribution points. We wonder does this money arrive at the elderly or disabled, for they are unable to go to collect it themselves. Instead they must depend on relatives or acquaintances. Another effect of this system is that food prices have risen. ”  The report describes the good work being done in a school for the deaf, a daycare centre for the disabled, describing the care given as “effective and full of love”.

The Elderly: As regards the elderly, Ben and Annie report: “Many of them under the care of the project are suffering the results of the drought. For them the food is too expensive with the result that they are hungry. Because of these problems we have (in addition to the home visitation and groups support) started a food distribution project providing maize, beans, oil and salt.”

The Rural Parish: “We visited Fr Victor, an African priest, who is working in Oropoi parish about three hours drive from Lodwar, near the Uganda border. About 3,000 people live in the central mission village with a further seven outstations.”

Commenting on the area, they said: “The soil in this area is fertile but because of the lack of rain nothing can grow. The ground is stone hard. Everywhere, there is hunger and that’s why we helped Father Victor with the purchase of food, maize, beans, oil and salt for the older and disabled people in his parish. We gave him some money for clothes and corrugated sheets for the roof of the parish house.”

“Because no grazing is possible for the animals and too few water sources are available, one sees everywhere alongside the road and in the fields carcasses of dead animals.”….“In the village there is only one well that people and animals have to use. From far away people come to this water supply. But the capacity of the well is not sufficient to serve all these people and the cattle wit

h water. That’s why women and children go to the dry riverbed, where they dig pits where, at the bottom, there is some water. This is put into a little can and in this way with a lot of patience the jerrycan will be filled. Because these holes are sometimes very deep,accidents have happened already. People are in a deep hole to catch water and then the pit falls in and the person is buried. To make life a bit easier for the people, Father Victor is looking for sponsors who would like to help him to realize an extra water supply.
We admire Father Victor, and how he with the few possibilities he has, still tries to help his people.”

Trócaire, which has many projects on the ground in East Africa, has expressed its concern for the deteriorating health and wellbeing of people in east Africa who, due to the prevailing combination of drought and conflicts, are unable to sustain themselves. The Director of Trócaire, Mr Eamonn Meehan stated that “this situation demands an immediate response from governments and people across the world.”
Staff on the ground report that they have never seen the situation so bad. In May 2017 alone, it’s health centres in Somalia treated over 19,000 people for cholera and malnutrition and other associated issues. 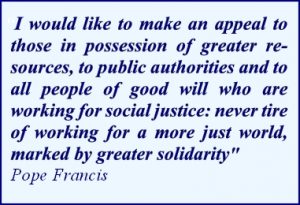 Trócaire is responding to this crisis in a practical way by providing food, water, purification tablets and other vital life-saving aids to support families in need. In Somalia, Trócaire health centres are providing food and health support to malnourished children. Across Kenya, Ethiopia and South Sudan, it is providing high-energy food and other much-needed support to hundreds of thousands of people facing hunger.

While Trócaire’s response is practical and admirable, the growing crisis in East Africa demands huge individual, national and international action in order to avert a humanitarian disaster.