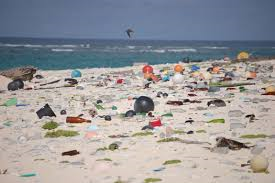 “The earth, our home, is beginning to look more and more like an immense pile of filth.”

Today is World Ocean Day. It is appropriate we recall that in his environmental encyclical, Laudato Si’, Pope Francis makes a stark and memorable critique of human consumerism and our ‘throwaway’ culture:

“The earth, our home, is beginning to look more and more like an immense pile of filth.”

Perhaps there is nowhere on the planet where Pope Francis’s claim is best demonstrated than on Henderson Island, an uninhabited dot in the South Pacific Ocean that lies halfway between New Zealand and Chile. The island is listed by UNESCO as a World Heritage site, describing it as “one of the world’s best remaining examples of a coral atoll,” that is “practically untouched by human presence.”

Australian photojournalist, Jennifer Lavers, a researcher at the University of Tasmania, has estimated that ocean currents deliver 3,500 pieces of plastic onto its once pristine beaches every day. They come from Russia, the USA, Europe, South America, Japan and China. In a recent study she co-authored with marine biologist, Alexander Bond, Lavers estimates that the island has an accumulation of 38-million pieces of, primarily, plastic rubbish, stating that she found the quantity, “truly alarming”. The trash included fishing nets, floats, plastic bottles and containers, single-use plastic utensils, and micro plastic, that have turned Henderson’s shoreline into an immense pile of filth.

The only continent whose human filth footprint is not represented is Antarctica, and for good reason.

In 2015, the same year that Pope Francis offered ‘Laudato Si'” to the peoples of the world, Jennifer Lavers and Alexander Bond, traveled to Henderson Island in an effort to document the extent of plastic pollution. Their research paper has since gone viral.

Lavers shared images of her trip to the island with msn.com which can be accessed by clicking here.

A more detailed article, outlining the Lavers and Bond research by National Geographic may be accessed by clicking here.

Henderson Island is, literally, a pin prick somewhere in the South Pacific, one of the four Pitcairn Islands, so remote and lacking fresh water, that human beings have left it alone.

And it is for that reason the Lavers and Bond discovery is so remarkable and alarming.