Home Africa How Big is Africa? As big as the USA, China, India and...

Africa: as many have never seen it before:

The comparison below shows it’s really as big as China, India, the United States AND most of Europe put together.

The graphic below shows Africa is as big as 13 nations and Eastern Europe.

The African continent is more than 30m sq km, but this is not reflected in standard Mercator maps. 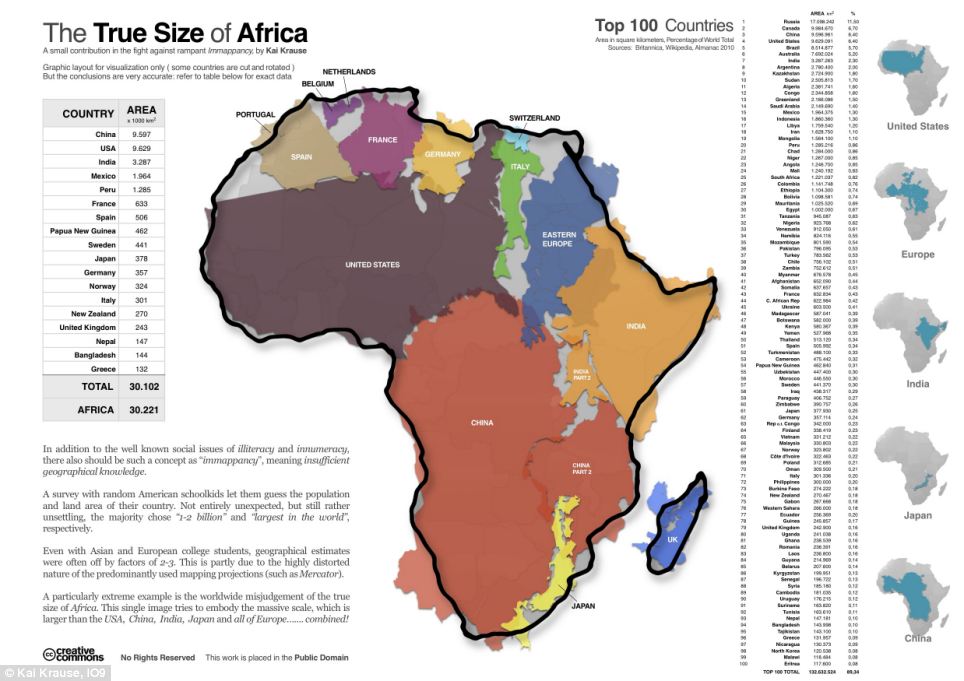 The True Size of Africa graphic shows the shear enormity of the African continent by showing how many other countries fit inside it.

It covers the same surface as 13 countries – including the United States, China and India – and the whole of Eastern Europe.

Britain also features on the graphic – with a comparative size to the island of Madagascar.

In total, Africa is more than 30million sq km.

The True Size of Africa graphic illustrates that its size is not shown accurately on a standard Mercator map, where countries in the centre appear smaller than they actually are.

This graphic shows Africa is bigger than the land masses of the US, China, India, Mexico, Peru, France, Spain, Papua New Guinea, Sweden, Japan, Germany, Norway, Italy, New Zealand, the UK, Nepal, Bangladesh and Greece put together.
It also lists the top 100 countries in the world in terms of biggest land size.
Russia (more than 17 km-squared), Canada, China, the US and Brazil make up the top five.

The graphic also demonstrates how easily the whole of Europe would fit into Africa, as well as some of the biggest nations in the world individually.