Home News Grief of the privileged few is preferred over the grief of the...

Pat Breen, Chair of the Oireachtas Committee on Foreign Affairs and Trade was co-launcher of the What in the World, Political travels in Africa, Asia and the Americas, a book which has evolved from the TV programme of the same name which RTE has broadcast over several years. The launching took place at UCC on Monday, 4 March 2013. 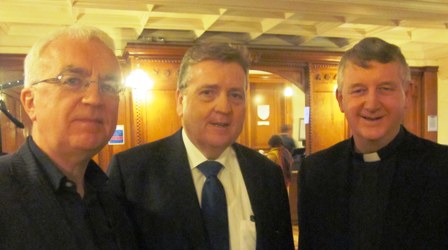 In his remarks at the Launch, Mr Breen reminded us that Ireland’s Aid Budget is 650m annually and the bulk of that goes into aid projects and developing world.

He drew our attention to a point made by the author, Peadar King, when he met the Oireachtas Committee last November. Peadar compared the level of media attention to 45 passengers killed in a plane crash in DR Congo with the relative lack of attention that was there for the 10 million who have died in that region over recent years. We can identify with people who travel in air planes because they are people like us. By contrast it is difficult for us to identify with the poor and dispossessed, disfavoured and we do not respond to them in the same way. Mr Breen quoted a line from the book: “The grief of the privileged few is preferred over the grief of the many”. It’s a very telling comment.

Mr Breen also said, “What in the World had to compete with our own domestic concerns here in this country, with the Champions League, and what we call reality television. There are huge challenges out there for the likes of Peadar to get his message across. But one thing that Peadar’s programme has done is that it brings the reality of the lives of the poor, dispossessed and disfavoured into our living rooms and I think that’s extremely important. So what is key to the series is that it tells the stories with great empathy. And it does that in a way that allows us to identify with people whose lives are so different to ours but whose rights to their essential humanity and dignity are exactly the same as ours. That’s extremely important.”

“It’s not enough of course for us just to empathise and the common factor in all the situations in the series and in Peadar’s book has highlighted that they have been allowed to happen or that they continue to happen or that they are made worse because of political indifference.” The attention of politicians has been drawn “to the needless suffering of so many people in so many parts of the world and as politicians we have a duty to do everything we can to respond to that challenge. We have to use all the tools of domestic politics to persuade, to influence, to confront those who can make a real change and we can make things happen, we can change things for ourselves, for example the way we deploy our aid fund or the conditions we build in our trading relations are part of the domestic rights armoury that Ireland as a democratic state has at its disposal.”

Speaking about the work of the Oireachtas Committee Mr Breen stated that they place a very high value on the relationships they have and are building with organisations and individuals to advocate on behalf of the poor and the marginalised. This includes engagements with people like Peadar King, with NGO’s and other groups. This gives the Committee a broader view of the issues that the Committee examines and helps to motivate them and to decide their priorities.

Mr Breen paid tribute to Liffey Press for taking on the challenge of publishing this work and encouraged everyone to buy it. Copies of What in the World can be bought from Liffey Press.