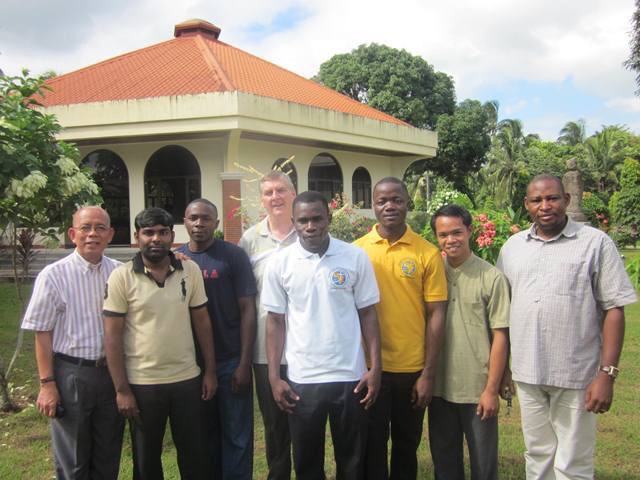 t was back in September 1985 that two SMA priests, both former missionaries in Liberia, west Africa [John McCormack and Pat Kelly] set foot on Philippine soil to begin a new venture – the presence of the SMA on the continent of Asia. Six months after their arrival, the SMA Good Shepherd Parish was formally inaugurated by Cardinal Sin; construction of the parish church began the following year and was completed in 1989, together with the parish house.

A House of Studies, to train Filipino seminarians who wanted to be missionaries in Africa, was also opened, in one of the eight cities that make up the Metro Manila area: Quezon City. Since the first class in 1992, ninety-eight students (from Kenya, India, Ireland, Philippines, Togo and the USA) have undertaken their Spiritual Year programme at Silang. Of that number, forty-five are now SMA priests working in Africa and other parts of the world. The present ISY Superior, Fr Robert Sagayam SMA (from India) was a student here in 1996 / 1997. He returned there as part of an international team in 2010.

In 2011, for the first time, African SMA seminarians came to Silang for their Spiritual Year programme. Up to then, they attended the ISY in Centre Brésillac, Calavi, Republic of Benin in west Africa. This new venture will help to build links between the newer branches of the Society and help to form international teams for mission in Africa. Three SMA priests are on the staff of New Manila: François dePaul Houngue (from Togo) and two Filipinos, Jerson Pineda and Alan Cañoneo.

Originally linked with India as the Asian Foundation today our Philippines unit stands on its own feet as the Philippines District-in-formation [PhDF]. Founded with the assistance of Irish, Dutch and American SMAs, today the PhDF has an all-Filipino adminstrative Council with Fr Alan deGuzman as Superior.