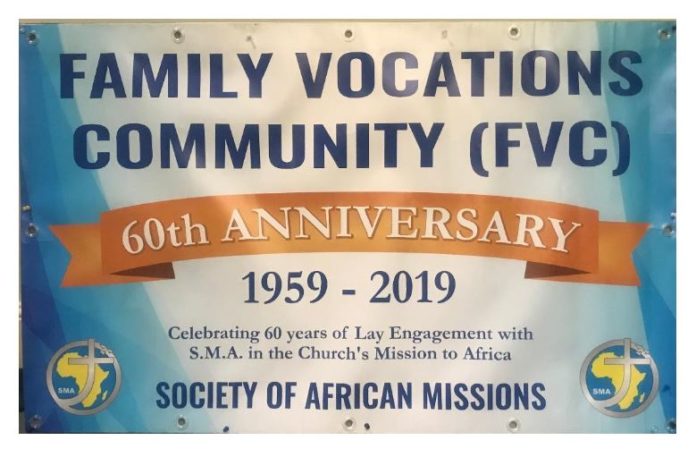 The Family Vocations Community (FVC) was established in the SMA seminary in Dromantine in 1959 to support the training of SMA students for the missionary priesthood, through prayer and financial contributions. The seminary Superior, Fr John Joe Conlon SMA together with Mr. Tommy McKenna (Belfast) teamed up to spearhead the inauguration of the Sponsoring movement now known as the Family Vocations Community. Some years before the 2nd Vatican Council [1963] began to speak about the role of laity, Tommy McKenna showed the way to involve laity in a new way in the Church, co-founding a movement of lay people involved with the SMA in the work of spreading the Gospel in Africa. Each Sponsoring group [between ten and twenty people] pray for vocations and contribute a certain amount per year for a period of 8 years. Today, the usual donation is £10 – £20 per annum. After its foundation in Dromantine it then spread to all parts of Ireland. There are FVC Directors based in our houses in Blackrock Road [Cork], Claregalway [Co Galway] and Ranelagh [Dublin].

These six decades of commitment and support call for a celebration – and celebrate we did in Dromantine on 8 September 2019. About 200 FVC members from the Ulster together with seventeen SMA priests participated in a Diamond Jubilee event to give thanks for the past 60 years of supporting the work of mission. Other guests included a representative of the Missionary Sisters of Our Lady of Apostles (OLA) and representatives of the Dromantine Summer Camp, a bye-product of FVC.

Guests arrived from 2pm to be welcomed by a cup of tea, viewing of the Exhibition of 60 years of FVC history and photographs. In the background beautiful songs were rendered by visitors from Cork, Ramelo Gregorio and his daughter Liv. Earlier this year Liv reached the semi-finals of Ireland’s Got Talent TV show.

The Diamond Jubilee Mass began at 3pm, led by the former Irish Provincial Leader, Fr. Michael McCabe SMA. Among the sixteen priests concelebrating the Mass were all but two of the past FVC Dromantine Directors, members of Dromantine SMA Community and Fr. Thyagu SMA, an Indian SMA priest who is the Vice Provincial Superior of the British Province, based in London. Former FVC Director [in Dublin, Dromantine and Claregalway] Fr Eamonn Finnegan preached the homily, reminding us all of the history and growth of the FVC. A very welcome and distinguished invitee was the co-founder of FVC 60 years ago, Tommy McKenna. His presence at the Mass and place in the history of FVC was rightly highlighted and praised by Fr. Finnegan, “little did Tommie think that his concern to support the training of priests for mission in Africa would grow so large and last so long. Well done Tommy… and sincere thanks!”

This Jubilee Mass was to be the first of eight Masses celebrated around the north, a number of which were to be led by Fr. Thyagu. During these Masses we gave thanks for the nineteen new priests ordained for the SMA this year. They have all begun their first missionary assignments in different parts of Africa. May God watch over them and keep them safe. They are the tangible proof of the fruit of the FVC and the support of our Sponsors.

Jubilee Masses were also celebrated in the other FVC areas of the country. 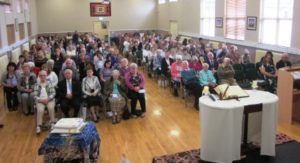 This Mass was a joyful occasion of thanksgiving and was greatly enhanced by the beautiful singing of Ramelo and Liv. During the Mass we combined the Prayers of the Faithful with a special procession bringing symbols to the altar, reflecting the mission of the SMA in Africa. Among the symbols were the Bible and a crucifix carved by a Nigerian artist in the Yoruba tradition. Another symbol reminded all of the six decades of generous commitment by members of FVC – the ‘little red book’ – a booklet used by the Doherty family from Derry in 1950/60s to record the names and weekly contributions of 3d (old pence). This amounted to one shilling per month. Such was the humble beginning of FVC. A representative of the Dromantine Summer Camps brought a Camp jersey symbolising the close connection between the FVC and DSC.

Special remembrance was made of other founding Head Sponsors who have gone to their eternal reward, including Johnny and Kathleen Lappin [Portadown], Willie Marley [Newry], Marie Bell [Ardglass who passed away early this year] as well as the thousands of ordinary Sponsors who have since gone to receive the reward of their labours. The Light of glory to them all.

At the close of the Mass a beautiful FVC Diamond Jubilee Cake was introduced and Tommy McKenna invited to be the ‘chief cutter’. He was flanked by representatives of SMA, OLA and FVC.

After Mass all invitees were treated to a three course meal in the various rooms laid out for the occasion, the number of guests being too many to be accommodated in the main dining room. All departed furnished with a Diamond Jubilee Certificate made especially to acknowledge their generosity and commitment to the SMA mission. Many expressed delight that they had witnessed and participated in a worthy and enjoyable celebration of 60 years of generous support of the SMA and the Church’s mission to spread the message of God’s love in the world especially in Africa.

Though the number of FVC Sponsors may have diminished the enthusiasm of the present members has not. We look forward to the future, confident that the people of Ireland will continue to support us as we train priests for the African Missions.

I conclude with a sincere Thank You to each and every Sponsor, past and present. May God, through the intercession of St Thérèse of Lisieux and St Francis Xavier, Patrons of the Missions, bless us all.