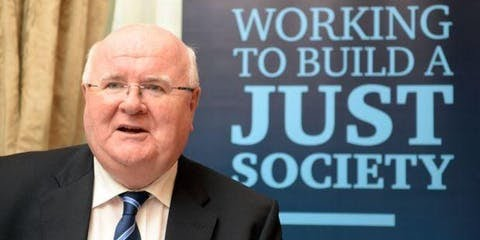 Editor’s Note: Fr. Sean Healy SMA is one of the most respected voices in Ireland calling for Social Justice and Change. With his colleagues in Social Justice Ireland, they continually highlight the ongoing inequalities that prevent our poorest and most vulnerable citizens from accessing their inherent rights that were proclaimed on Easter Sunday 1916 in the foundational document of the Irish Republic and in the subsequent Constitution.

The following is a reflection by Fr. Sean on Fake News, the increasing blight of the 21st Century that is undermining the institutions of democracy and is being cynically used and abused on social media and internet platforms to promote dark political agendas.

As always, Fr. Sean’s thinking is worth pondering.

Fake news stories are all over our media. According to a recent study by the journal Science, the number of fake news stories rose by 365% in 2017. A study of Facebook users showed that people over-65 shared seven times as many fake news articles as those aged 18-29. Currently, there are 21 fake news sites in the US. Most of these are pro-Trump and are defined as offering “knowingly false or misleading content created largely for the purpose of generating ad revenue”.

All of which leads me to two conclusions. First of all, the need for reliable information, accurately researched and presented has never been more important. This is an area in which Social Justice Ireland specialises. Our annual Socio-Economic Review presents a comprehensive analysis of where Ireland is, as a society, where we want to go and a logical pathway to get us there.

You will also note that this year we have brought forward the publication date for our Review and are now presenting it as a guide to a fairer Irish society. The launch received extensive coverage in electronic and print media.

My second conclusion is that libraries provide a great public service. It is crucial that people have somewhere to go to have a quick read or to do some fact-checking particularly if the alternative is a contribution to the obscene profits generated by companies such as Amazon while they pay very little tax.

A library system serves, among others, the growing number of people who, although they like reading, don’t have sufficient disposable income to buy books on impulse. Its great to have a place where people can simply take out a book on loan about a topic they re interested in, read it and return it. The numbers for Ireland are impressive.
17.1 million visits are made to public libraries each year.
19.3 million books, audio books, CDs and DVDs are borrowed from public libraries annually.
1.9 million Internet sessions are provided each year on 2,100 Internet access PCs and via free wi-fi.
There are 336 branch libraries and 31 mobile libraries.
Local Authorities spend an estimated €126 million on library services.

This is why Social Justice Ireland for many years has highlighted the importance of libraries and continues to urge Government to provide as comprehensive a service as possible. We will continue to contribute towards doing so.

It is critically important that we take steps, small and maybe large, to counteract the flood of fake news that could easily over-run real, accurate information. We thank all of you, our members, for your ongoing support of our work which enables us to do just that.