Our sincere thanks to George Jameson who researched and wrote these profiles.  Click on these links to see Profile Part 1 and Profile Part 2

It has been 52 years since the Democratic Republic of Congo (DRC) gained independence from Belgium. Today, one could argue that some sort of stability had been established in the country during the first tentative steps toward a democratic state. This however is not the case and with a brief summary of the first few years of the DRC’s road to independence this myth can be quite easily shattered.

On 30 June 1960, in somewhat of a rush, the Belgian parliament granted independence to one of its former colonies which saw Patrice Lumumba become the nation’s first Prime Minister and Joseph Kasavubu the first President. This situation was not to last very long. Only two weeks after independence, the DRC saw its first major setback. On 11 July, the province of Katanga seceded and soon after South Kasai followed; both mineral rich mining areas.

With the aid of Belgian resources, Katanga under the authority of Moise Tshombe fought off many attempts from central government to take control of the area. That same year, Tshombe allowed a UN force to enter Katanga which later led to an increase in the number of UN personnel on the ground. This was to facilitate the withdrawal of foreign troops; most of whom were Belgians.

Trouble continued to persist in Katanga as attempts for reconciliation between the central government and the Katangese proved ineffectual. The situation steadily worsened and desperate times called for desperate measures. Patrice Lumumba was dissatisfied with the UN mission in the Congo, consequently he felt the need to request help from the Soviet Union; this did not resonate very well in the Western World as these events were unfolding during the Cold War era. Given the fact that just one year earlier communist Cuban rebels had achieved a successful coup d’état, President Dwight D Eisenhower of the USA, through the CIA made it very clear that this was not going to happen again.

A little over two months after the Congolese had gained independence volatility within the region became apparent. On 5 September, Patrice Lumumba was dismissed from his position as Prime Minister by President Kasavubu. On 12 September, Lumumba was then placed under house arrest by forces close to Army Chief of Staff Joseph Mobutu yet this did not last as he was released by Congolese troops loyal to him. However, on 14 September, Joseph Mobutu, with the help of the CIA seized power in a military coup; they immediately suspended parliament and the constitution while also placing Lumumba under house arrest once again. At the same time, Lumumba’s vice-Prime Minister Antoine Gizenga was establishing a rival government in the eastern part of the country stationed in Stanleyville. 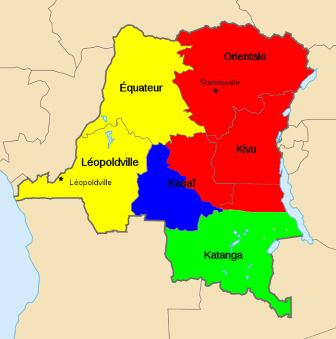 There were 4 rival regimes operating
in the Congo at this period.

Leopoldville led by Joseph Mobutu and
supported by western governments.

Stanleyville led by Antoine Gizenga and
supported by the Soviet Bloc

Katanga led by Moise Tshombe and
supported by Belgium.