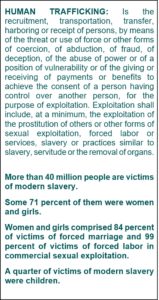 The Pontifical Council for Justice and Peace has designated February 8 as anannual Day of Prayer and Awareness against Human Trafficking. February 8 is also the feast day of St. Josephine Bakhita, who was kidnapped as a child and sold into slavery in Sudan and Italy. Once Josephine was freed, she became a Canossian nun and dedicated her life to sharing her testament of deliverance from slavery and comforting the poor and suffering. She was declared a Saint in 2000.

On February 8, Catholics all over the world are encouraged to pray for victims of human trafficking and to become more aware of this terrible reality. This day is an invitation to us all to explore the world of trafficking and the suffering it inflicts on millions of people. It is an opportunity to learn about what trafficking means and to also explore the material, mental and spiritual impact it has on individuals and societies.

Human trafficking is the modern-day term for slavery. Women, children and men are bought and sold, beaten, abused and sometimes killed as they are traded like commodities on the invisible trafficking markets across the world.

Prayer for the End of Human Trafficking

God of freedom, beauty and truth we believe that your deepest desire, your most powerful energy, is that all creation might know abundant life.

We raise our voices in anguished prayer for our sisters and brothers, women and girls, men and boys, who are modern day slaves; They are your beloved daughters and sons, exploited sexually or forced to work because of human violence and greed.

Fill us with your holy anger and your sacred passion that those who are trafficked might know healing and justice; that traffickers will come to repentance and conversion; that all of us might live in such a way that others are not made to pay the price
for our comfort and convenience.

Hasten the coming of the day when all people and our precious Earth itself will be treated, not as a commodity, but as radiant images of your freedom, beauty and truth.
Amen. May it be so.

As shared by the Sisters of Charity of Saint Elizabeth, Convent Station, N.J.