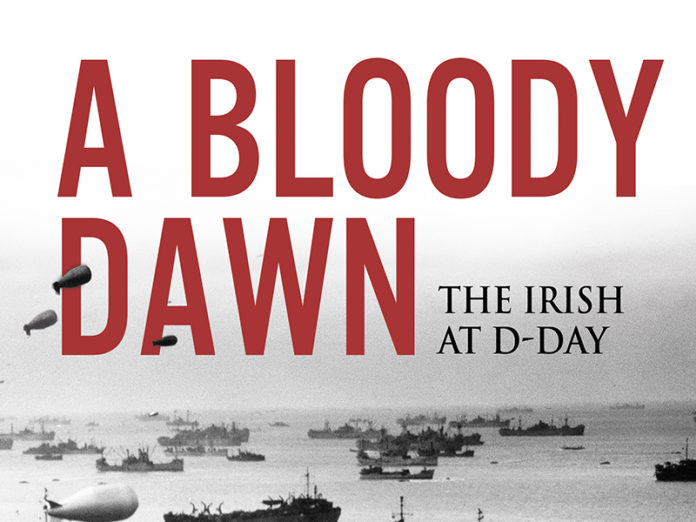 British, US, Canadian and French troops attacked German forces on the coast of northern France, on 6 June 1944, in what is known as D-Day. It was the largest naval, air and land operation ever attempted in military history and marked the start of the campaign to liberate Nazi-occupied north-west Europe.

D-Day involved the simultaneous landing of tens of thousands of troops on five separate beaches in Normandy.

On Friday, a new book will be launched by Irish author and former Irish Defence Force officer, Dan Harvey which tells the story of the Irish in an operation that cost thousands of lives but which began the liberation of occupied Europe. Details of retired Lt. Colonel Harvey’s book are given below.

Today, the Society of African Missions wish to recall the memory of a fellow missionary, Columban missionary, Fr. Patrick McMahon, who was killed during the battle of Normandy, having landed within days of the D-Day operation. On this, the 75th anniversary of D-Day, we pray for Fr. Patrick and for all who lost their lives during WWII.

Let us recall the terrible cost of war as we commit ourselves to building a world where the foundations for real and lasting peace are built on justice and human dignity for all.

In a character reference, sent to the Columban Fathers, the President of St. Macartan’s College wrote: ‘His [Fr. Paddy’s] conduct has been most exemplary. His character is all that could be desired in a candidate for the priesthood. He is straightforward, truthful, and obedient.’

Patrick McMahon was ordained priest in Dalgan Park, Shrule in 1940.

Due to WWII, many missionaries were unable to travel to their mission territories and many, like Fr McMahon, volunteered to become chaplains with the British, Canadian and US Expeditionary Forces.

The Allies landed in Normandy on 6 June 1944. Some days later the 9th Royal Tank Regiment, to which Fr. McMahon was attached, arrived in France. On 14 August 1944, during a fierce battle for the Falaise Gap, after the Allies had broken out of their beachhead and were in pursuit of the fleeing German armies, Paddy went out under fire in an ambulance to rescue a wounded Canadian soldier. On the return journey the ambulance was hit by a shell and he was killed. He was buried in consecrated ground in the churchyard at Ussy, Salvados, Normandy, France. He was 27 years old.

The photograph of Fr. McMahon’s grave was taken at sunset on 11 July 2013 by the SMA Communications Officer, while working on a photographic exhibition for the 2013 UK City of Culture. 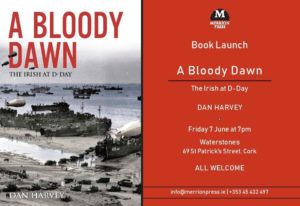 A BLOODY DAWN
The Irish At D-Day
Dan Harvey

75 Years On, The Role of Irish Personnel finally explored

‘Soldiers, Sailors and Airmen of the Allied Expeditionary Force: You are about to embark upon the Great Crusade, toward which we have striven these many months. The eyes of the world are upon you. The hope and prayers of liberty-loving people everywhere march with you.’
– General Dwight D. Eisenhower, Supreme Commander Allied Forces, June 6th 1944

75 years ago a curious poetic message was emitted on the airwaves: Wounds my heart with a monotonous languor…So went the coded phrase broadcast from the BBC to alert the French Resistance fighters that the largest land invasion of the 20th century was on. More than 150,000 troops were landed on the beaches of Normandy, and amongst that huge number were hundreds of Irish personnel who formed part of the overwhelming force that would turn the war in Europe. As we celebrate the 75th anniversary of D-Day, their contribution is, finally, fully explored.

About the book: The epic Allied invasion of German-occupied Normandy on D-Day, 6 June 1944, has been extensively chronicled. The largest seaborne invasion in history, it began the liberation of German-occupied France, and later Europe, from Nazi control, laying the foundations of the Allied victory on the Western Front.

What is less well known, however, is that thousands of Irish and members of the Irish diaspora were among the Allied units that landed on the Normandy beaches. Their vital participation has been overlooked abroad and even more so in Ireland.

There were Irish among the American, British and Canadian airborne and glider-borne infantry landings; Irishmen were on the beaches from dawn, in and amongst the first and subsequent assault waves to hit the beaches; in the skies above in bombers and fighter aircraft; and on naval vessels all along the Normandy coastline. They were also prominent among the D-Day planners and commanders.

This Irish contribution to the most extraordinary military operation ever attempted in the history of warfare is at last told first time in A Bloody Dawn – The Irish At D-Day by Irish military officer and longstanding writer of military history, Dan Harvey .

About the Author: Lieutenant Colonel Dan Harvey, now retired, is the author of A Bloody Dawn: The Irish at D-Day (2019); Soldiering Against Subversion: The Irish Defence Forces and Internal Security During the Troubles, 1969–1998 (2018); Into Action: Irish Peacekeepers Under Fire, 1960–2014 (2017); A Bloody Day: The Irish at Waterloo and A Bloody Night: The Irish at Rorke’s Drift (both reissued 2017); and Soldiers of the Short Grass: A History of the Curragh Camp (2016)