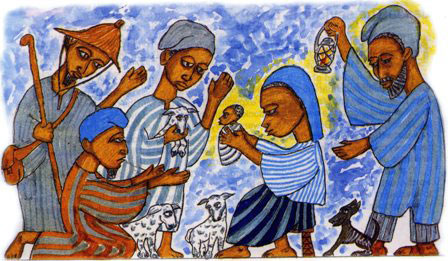 I bring you news of great joy.
This night a child is born for us,
a son given to us.

A certain woman in her late thirties was married with three children. She also had a very good job in a big company. Then the managing director decided to retire. To her amazement she was appointed in his place. She phoned her husband telling him the good news. They could now move to a bigger house, and go for the expensive holiday they had always dreamed about. Two months later she couldn’t believe what she knew was true – she was pregnant. This was a child that was not planned like the other three were. Besides it would upset all the plans they had made recently to move to a bigger house etc. She would now have to resign from her new job because she knew she could not fulfill the extra workload, which involved longer working hours and much travel. Having an abortion was out of the question because of their religious beliefs. The child was totally unexpected and disturbed the plans they had made. Both of them were caught unawares.

For her this child could not have come at a worse time. She and her husband were totally unprepared for this as what happened was equally totally unexpected.

Wasn’t it like that the first Christmas?  When Jesus entered our world, he came totally unexpected at that moment. The people were unprepared for his coming then. They were caught completely unawares. If he had only let them know ahead of time, they could have prepared a palace fit for a king. He certainly wouldn’t have been allowed to be born in a stable with a manger to lie in. This would have been unthinkable. But maybe it was just as well they didn’t know. How does one prepare for God? What welcome, what dwelling place would be worthy of him?

But that is what happened and in fact what still happens. Christmas is everyday, everyplace, everyone. Can we have the eyes of a child; the eyes of wonder, open to what is going on at any given time. So where is Christmas happening for us these times?  Where is God coming into our lives?

Yet the mission of Christmas is very clear. Jesus came among a people dominated by the greatest political power of the time. He came and was accepted by the poor and marginalised, people like the shepherds. Jesus tells us that solidarity with the poor and the unimportant of this world is what will give us real happiness and peace. It doesn’t mean we are called to imitate them but it is often they who understand God who emptied him of power and majesty to ‘pitch his tent’ among us.

Are we not all poor in so many ways? Poor in reaching out to others we don’t like, sometimes unforgiving towards those who have hurt us. Bitter maybe because we haven’t been given the importance we thought we were entitled to by others. Sad because we would like to have more money. These are the areas in our lives where Jesus wishes to be born in us. The great Good News is that he loves us most where we love ourselves least. He is not ashamed to dwell in these parts of our lives. But we need to be aware of this and invite him in. He seems most at ease with weakness, dependence and vulnerability, all of which we usually wish to flee from. Yet here is the space he wishes to occupy.

Christmas is especially a call to all of us to hope. This is not an easy virtue to have at these times. We hear of the tragic fighting in many parts of Africa, in the Holy Land. The economic collapse here at home has caused untold pressure and even despair for some.

Many of us are indeed touched by fear, by danger and death. It is not what the future holds which is important for us as Christians but who holds the future in the palms of his hands. Is it not our loving God and father? That is our security.

A child is born to us, a son is given to us. Christmas is a call to us to return to the source of our faith and trust in God.  It is in the darkness that the light shows the way forward and if we believe Jesus is the Light of the world then he will lead us out of this darkness into his own wonderful light. Tolstoy, the famous Russian writer once said: ‘There is not enough darkness in the whole world to put out the light of one small candle’. Let each one of us be that candle so that together our lights will overcome whatever darkness continues to be in our world.

Yes, if we open our eyes we see the many signs of God’s care mediated through people who do not give up hope. We see all the aid workers in the refugee camps, the peace negotiators who spend so much of their time bringing warring parties together, the thousands of volunteers here in Ireland who give of their skills for the benefit of those even less well off than they are.  Here is Jesus again among his people, the poor and needy.

“Lord Jesus, thank you for coming to us in weakness, vulnerability and littleness. Come into all the areas of our lives where we need you most.  Help us to be people of hope, for you are our Saviour.  Amen’.