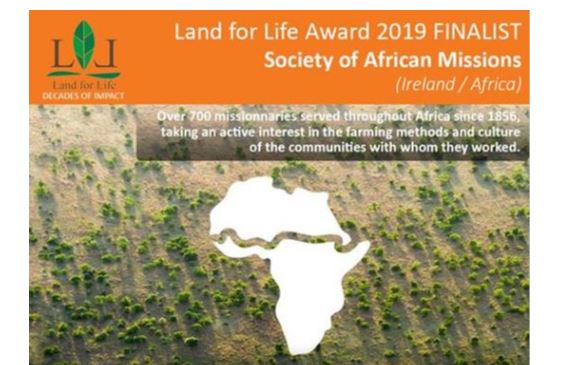 Following the announcement yesterday from Bonn, Germany, La Croix International has reported on the shortlisting of the SMA for the major UN ‘Land for Life’ Award.

Father Maurice Henry of the Society of African Missions (SMA) will be on tender hooks on the evening of June 17 when the United Nations announces the winner in Ankara, Turkey, of its 2019 ‘Land for Life Award.’

That date coincides with World Day to Combat Desertification, the missionary organization reports in its on-line newsletter.

The prize is awarded under the auspices of the UN Convention to Combat Desertification (UNCCD).

You may read the full La Croix International story by clicking here.

The Irish Catholic has also covered the SMA UN nomination. You can access their report by clicking here.

The Society of African Missions (SMA) are shortlisted as official finalists for the 2019 Land for Life Award, a major UN prize, presented through the United Nations Convention to Combat Desertification (UNCCD).

This year [2019] marks a special milestone on the road to a greener planet, as we are celebrating the 25th anniversary of the UNCCD, thereby highlighting remarkable progress in terms of recovery and restoration of degraded landscapes all over the world.

We selected eight impressive finalists who successfully qualify for this year’s theme: “Decades of Impact”.

Over the past 25 years (and more!), you all contributed to achieve land degradation neutrality on a large-scale, with long-term changes and notable positive impacts on land, people, communities, and society.

The winners will be announced on World Day to Combat Desertification next, 17 June, in Ankara, Turkey.

Once again, we extend our congratulations to you, your community and your partners, and we look forward to being inspired by your tireless efforts and meaningful actions in the next decades.

Announcing the nomination on their website this afternoon, the UNCCD stated:

The Society of African Missions SMA Ireland has over 150 years of missionary experience in Africa, focusing on the challenge of integral human development, serving the African communities by providing hospitals and schools, and seeking to establish an indigenous leadership.

They have recently launched the Laudato Tree Project, an awareness and fundraising campaign to support the aims of the Great Green Wall. The SMA was instrumental in bringing visibility to the issue of desertification in Ireland and opened an interfaith dialogue around land issues.

Their crucial advocacy role actively contributes to move forward towards the achievement of @globalgoalsUN, especially goal 15.3 : “By 2030, combat desertification, restore degraded land and soil, including land affected by desertification, drought and floods, and strive to achieve a land degradation-neutral world.”

Responding to the announcement Fr. Henry said that being a finalist was a special recognition of all SMA and OLA missionaries who, over a century and a half, have dedicated their lives to Africa and its people.

“The many generations of missionaries from Ireland and the wider SMA/OLA provinces have grown to love and cherish the African people. We know that Africa has so much potential if only given the opportunity. We believe in Africa and the African people and all of us, until our last breath, will give our lives to supporting the integral human development of this great continent and its rich tapestry of cultures and traditions.”

“We must wait now until June 17, World Day to Combat Desertification,” Fr. Henry continued, “to see if we win the Award. However, whoever is the eventual winner we will celebrate, for each of the eight finalists are dedicated to the restoration of degraded lands in Africa and helping to make the Earth sustainable for future generations.” 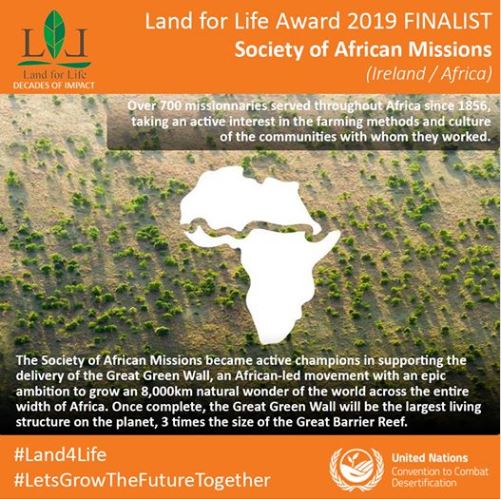