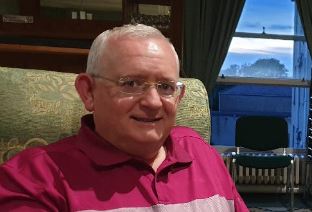 “There is something new happening. Something of what Archbishop Eamon Martin spoke about the other day on ‘singing a new song’. We have something new to offer. There is new energy here and I want that to continue from here, into the different areas we go back to.”
– Fr. Malachy Flanagan, SMA Provincial Leader

The Irish SMA Provincial Assembly, meeting at the Dromantine Conference & Retreat Centre, has elected Fr Malachy Flanagan as Irish Provincial Leader in succession to Fr Michael McCabe. Fr Malachy, from Tullyallen parish (Drogheda, Co Louth) is the son of the late Mary (Oliver) and the late John Flanagan. Born in 1962, he did his schooling at Tullyallen National School and Drogheda Technical School where he completed his secondary schooling in 1979.

Following his election Fr. Malachy was greeted by all of the Assembly delegates who wished him well in his new role and responsibilities.

In an impromptu address to Assembly delegates, Fr. Malachy stated that he was filled with immense peace and calm when considering the possibility of election as the Provincial Leader, if he was to be the one elected at the Assembly. He continues to feel that peace now.

Fr. Malachy recalled how, this morning Fr. Eddie Hogan spoke about ‘grace of state’. “And I believe that is part and parcel of what I received. The grace to be able to accept, if I am the one to be chosen, and I have great peace.”

Speaking directly to the Provincial Assembly delegates, Fr. Malachy asked for the support of his fellow SMA’s.  “I’m counting on your support in every way. We will work together. I feel a lot of energy from this Assembly. There is something new happening. Something of what Archbishop Eamon Martin spoke about the other day on ‘singing a new song’. We have something new to offer. There is new energy here and I want that to continue from here, into the different places we go back to.”

Recalling his predecessor, Fr. Michael, and his fellow Council member, Fr. Maurice Henry SMA, Fr. Malachy thanked them for their companionship, dedication and hard work over the past six years. Fr. Malachy concluded by thanking the Assembly.

“Following the election of our new Provincial Leader, Fr. Malachy Flanagan, I wish him very well in his task of leadership in an era of great change in the Province. And I know there are many challenges he has to face.” Fr Malachy has the ability to cary out the task given to him. “I wish him well and I really hope he gets the support he will need from the membership. Above all, I hope that God will bless him during this upcoming mandate.”

We congratulate Fr. Malachy and we assure him of our prayers and support in the coming years. We ask our confreres, supporters and the wider SMA family to remember him in their prayers also. It is not an easy task he has assumed and will, indeed, need our collective support and goodwill as we continue to live out the charism of our founder, Bishop Melchior de Marion Brésillac – to Africa and the most abandoned.

A short biography of Fr. Malachy Flanagan can be accessed by clicking here.