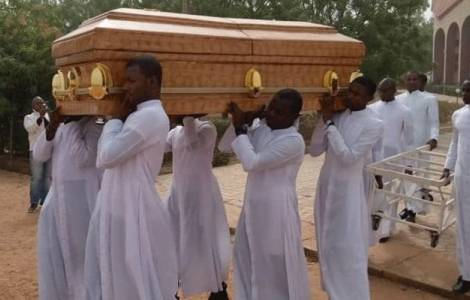 A Nigerian NGO – the International Society for Civil Liberties and Rule of Law (Intersociety) has notified the Vatican News Agency – FIDES – that “more than 20 clergymen including at least eight Catholic Priests / Seminarians were hacked to death in the past 57 months and at least 50 more kidnapped.” The report said that available statistics have shown that between 11,500 and 12,000 Christian deaths were recorded June 2015 when the present  Nigerian Government came to power. There are three principal groups involved in this activity: Jihadist Fulani Herdsmen accounted for 7,400 Christian deaths, Boko Haram for 4,000 and the 150-200 at the hands of Bandits / Highway kidnappers.
The report also states that Boko Haram / ISWAP (Islamic State in West Africa) attacks mostly Christians in Nigeria’s Northeast. Bandits/Highway Kidnappers are active in Northern Nigeria and they attack both Muslims [in rural areas] and Christians [travelling to Northern or Southern parts of the country using the Birnin-Gwari Federal Road].
Targeting and abducting Christian travelers on highways particularly in Northern Nigeria, who are mainly citizens of Igbo extraction, have also intensified and taken a dangerous dimension in recent months – whereby the victims are separated at gunpoint according to their tribe and religion.
The latest victim of Christian persecution in the Catholic Church in Nigeria is the eighteen year old Michael Nnadi, kidnapped together with his three companions from the major Seminary of the Good Shepherd of Kakau, in the State of Kaduna, in northwest of Nigeria, by armed men in the night of January 8 (see Fides, 13/1/2020). While his three companions were subsequently released, the seminarian’s body was found on February 1 (see Fides, 3/2/2020).
With thanks to Agenzia Fides, 16/3/2020