Today, and at Masses over this weekend in the Archdiocese of Cashel and Emly, Archbishop Kieran O’Reilly SMA is encouraging the faithful to pray for peace in the Congo and in South Sudan. Archbishop O’Reilly’s initiative is in response to Pope Francis’ call for a Day of Prayer and Fasting for Peace in both countries and in all war-torn nations, which takes place today.

Welcoming the Day of Prayer, Archbishop O’Reilly said, “Today we are invited by the Holy Father to pray and fast for peace in war-torn nations, and in particular in the African countries of the Democratic Republic of the Congo and South Sudan.

“More than four million people have been displaced from their homes in the ongoing conflict in South Sudan, our world’s youngest nation. A further three million people have been displaced by conflict in the neighbouring Congo. This lasting violence and division has only served to exacerbate the effects of the drought and hunger crisis gripping the region. 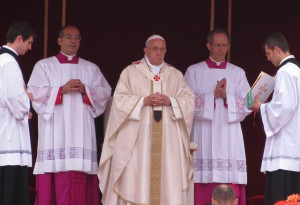 “In his appeal, Pope Francis has invited each of us to ask ourselves ‘What can I do for peace?’ Jesus Christ has given dignity and worth to each and every human being. We must make peace and justice the cornerstone of our lives to ensure that dignity for all. I am grateful for the work of Trócaire and the many Irish missionaries who minister to promote peace and support those affected by conflict.

“Today, and at Masses this weekend, I invite the faithful to pray for the people of the Congo, South Sudan and those across the world who face the violent realities of war each day that they may find peace, safety and love.”

La Croix International’s has published an article at 17:01 on 23 February 2018 headed ‘Congo Catholics mobilize against Kabila – If the police charge, demonstrators are asked by the Lay Coordination Committee to kneel and pray ‘ which may be accessed by clicking here.

Archbishop Kieran O’Reilly SMA is Archbishop of Cashel & Emly and chair of the Council for Missions of the Irish Catholic Bishops’ Conference.