Editor’s Note: On the first day of their Autumn General Meeting, October 1, 2019, the Feast Day of St. Thérèse, Patron of the Missions, the Bishops of Ireland concelebrated Mass in Saint Mary’s Oratory in Saint Patrick’s College, Maynooth. Following Holy Communion, the Archbishop of Armagh and Primate of All Ireland, Archbishop Eamon Martin, encouraged the dioceses, congregations and young people of Ireland to support the SMA’s Laudato Tree Project. Below is the statement he made during Mass to officially launch the Extraordinary Mission Month in Ireland as designated by the Holy Father Pope Francis.

“At the beginning of this extraordinary month of mission, I commend to the dioceses, congregations and especially to the young people of Ireland, the ‘Laudato Tree’ project being sponsored by the Society of African Missions. Taking its inspiration from Pope Saint John Paul II’s appeal for the Sahel in 1980, and Pope Francis’ 2015 encyclical on care for our common home Laudato Si, the project encourages a concrete action – the planting of trees and increasing biodiversity both in Ireland and also along Africa’s Great Green Wall, together with awareness raising and education about Faith and the environment.

“It is estimated that by 2020, 60 million people from sub-Saharan Africa will have migrated because of desertification caused by Climate Breakdown. The African nations in the sub-Saharan Sahel region have come together to plant a wall of trees, 8000 km long and 15 km wide, with the aim of restoring land which is being lost to desertification. As part of SMA’s commitment to the people of Africa, and to engaging in a positive and creative way to caring for the earth, our common home, they are encouraging us to assist with the planting of the ‘great green wall’ of trees across Africa. 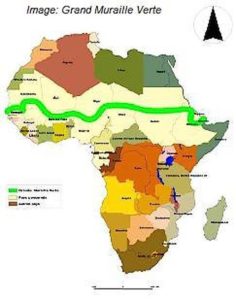 “The Laudato Tree project invites us to educate ourselves from a faith perspective about the impact of climate change on some of the poorest peoples of the world, and to raise donations towards the planting of a number of trees in Ireland and at the same time five times that number along the great green wall. I think this project could especially catch the imagination of the young people of Ireland, in their youth groups, schools and colleges and workplaces; I hope also to embrace it in a cross-community way with my brother Church of Ireland Archbishop Richard Clarke and with some of our young people; the project opens up an opportunity for us to address the climate crisis from a faith perspective, rooted in our love of God the Creator, the dignity of the human person, while calling us personally to responsible simplicity of life and ecological conversion; it kindles a missionary charity in solidarity towards those most vulnerable people of the world who are disproportionately affected, and it symbolises new life, new growth, hope for the future and love of God by caring for God’s creation.”

The Laudato Tree website can be accessed by clicking here.

The Mass was live streamed on the Irish Catholic Bishops’ Conference Facebook Page at https://www.facebook.com/IrishCatholicBishops/