Home Africa An African perspective on Laudato Si’ – towards an African theology of...

Whereas our traditional African cultures were highly concerned with respect for the balance between humankind and its environment, paradoxically this aspect of our tradition, which also had a religious dimension, is not sufficiently made clear in the expression of our Christian faith.
– Fr. Franck Allatin, Ivory Coast

Editor’s Note: Father Franck Allatin is the rector of the Basilica of Our Lady of Peace at Yamoussoukro in central Ivory Coast. In this article, he reflects with Guy Aimé Eblotié of La Croix Africa, on the treasures of African culture and how they can contribute to an African theology of ecology and the safeguarding of our common home, inspired by Laudato Si’. This article was first published in La Croix International on September 6, 2018.

Fr. Allatin’s reflections are of particular interest to the Society of African Missions as we embark with African partnerships, including the African Union and the United Nations Convention to Combat Desertification, to help 13 African nations in the Sahel to deliver by 2030 the Great Green Wall. 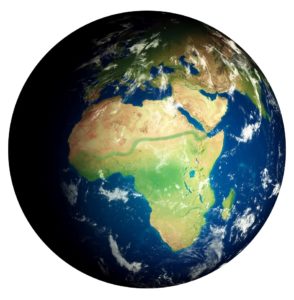 The African Church, as well as the Universal Church, can play a significant role in helping to inspire local communities, as well as regional and national governments across the Sahel, to commit to delivering this epic project that offers genuine leadership to the whole world. As well as addressing 15 of the 17 sustainable development goals, Africa’s Great Green Wall can also become a growing symbol of interfaith harmony.

The Catholic Church in Africa should be in the forefront in finding ways in helping to deliver this inspirational project. Fr. Allatin’s reflections, as presented below, are a welcome beginning.

La Croix Africa: Is there an echo in the encyclical Laudato Si’ of the awareness raising campaigns organized by ecologists?

Father Franck Allatin: Yes, with respect to the description of the situation and the urgency of action to protect our planet, the message of Laudato Si’ does indeed echo that of the ecological movements.

The pope’s references in the encyclical to the studies and projects of these movements are evidence of this.

However, there is a significant difference regarding the approach to the issue of ecology and in the paradigms that form the basis of Pope Francis’ reflection on the need to safeguard “our common home.”

Faithful to the Christian tradition, the pope’s encyclical analyzes the ecological crisis from the perspective of a theology of creation.

In the pope’s view, the world is neither a product of man nor simply the result of chance. Rather it is a work of God’s creative power over which humankind acts as a steward and collaborator of God.

Pope Francis’ approach “transcends the categories of mathematics and biology” and is based on an anthropological view.

In fact, there is a correlation between ecology and anthropology to the extent that the relationship of man and his milieu is influenced by the perception that man has a special place in the universe.

This social encyclical on ecological is therefore not exclusively a declaration in favor of safeguarding the earth. It is actually a matter of saving humankind and the earth.

To what extent is respect for nature a requirement of the Christian faith?

The biblical theology of creation teaches us that the first man, Adam, was created from the Earth.

Thus, by reason of creation, man has a symbiotic relationship with the earth such that by degrading nature, man indirectly attacks his own nature.

With respect to this, the pope reaffirms that a genuinely flourishing existence lies at the crossroads of three relationships, namely with God, with one’s neighbor and with the Earth.
It is therefore not possible to live out one’s Christian faith by omitting our obligations to “our sister and mother the earth.”

Saints like Francis of Assisi remind us that the more the human heart makes an effort to listen to God, the more it becomes sensitive to the secret language of nature.
And, thus, humankind can no longer perceive its relationship with the earth in terms of domination but rather in terms of service.

Hence, in Laudato Si’ Pope Francis emphasizes that our responsibility is “to cultivate and guard the garden of the world.”

How can the Church of Africa take up the pope’s message on integral ecology?

The voice of the Church in Africa needs to make itself better heard on platforms for reflection on the state of our planet. Unfortunately, environmental issues do not yet form a significant part of our diocesan pastoral programs in Africa.

Whereas our traditional African cultures were highly concerned with respect for the balance between humankind and its environment, paradoxically this aspect of our tradition, which also had a religious dimension, is not sufficiently made clear in the expression of our Christian faith.

So at this level, a vast field of research remains in the field of inculturation and this could become a significant African contribution to a theology of ecology.

The African Church also needs to place itself in the avant garde of the battle.
This could involve making choices in materials used in the construction of religious buildings belonging to the church as well as in the use of environmentally respectful energy sources.

I must admit that here in the Basilica of Our Lady of Peace in Yamoussoukro, we have not yet really reflected on this issue.

However, the planned hostel at the Basilica which is currently in the design phase does include elements linked to biodiversity and the use of renewable energy sources.