Allegations and denials over the use of a derogatory and demeaning word by the US President to describe a number of countries, including African countries, has fuelled international controversy. The President has tweeted that he did not use the belittling word ascribed to him during a meeting with a bi-partisan group of Senators at the White House on Thursday 11 January 2018, discussing immigration.

Viewed against the background of a range of comments made by President Trump since taking office a year ago, it is clear he has a credibility issue internationally, prompting the United Nations to issue a very clear and firm statement condemning the President. UN Human Rights spokesman, Rupert Colville, told a Geneva news briefing: “You cannot dismiss entire countries and continents as ‘shitholes’, whose entire populations, who are not white, are therefore not welcome.” Colville went on to condemn as racist President Trump’s alleged remark. You may listen to Colville’s comments by clicking the link below:

The lawmakers were in the Oval Office discussing changes to the visa lottery system and immigration as a whole, and when talk turned to immigrants from Africa, the President allegedly asked why they would want people from “all these shithole countries” coming to the United States. It is then alleged he said the U.S. should instead try to attract people from Norway and similar countries. The day before the US President hosted the Norwegian Prime Minister, Erna Solberg.

Following the President’s tweets Illinois Senator Dick Durbin, who was present in the Oval Office at the time of the controversy, refuted the President’s denials. Durbin stated: “You’ve seen the comments in the press. I’ve not read one of them that’s inaccurate. To no surprise, the president started tweeting this morning denying that he used those words. It is not true. He said these hate-filled things, and he said them repeatedly.” You can listen to Senator Durbin’s full statement by clicking the link below:

A Zambia tourism website has been simultaneously praised and criticised by putting its own twist on the US President’s comments with a clever ad that has been copied and tweeted across the globe.

The ad, posted on the Facebook page of Zambiatourism.com, features a stunning sunset vista and the slogan: “Visit ****hole Zambia … Where the only stars and stripes you’ll have to see are in the sky and on a zebra.” 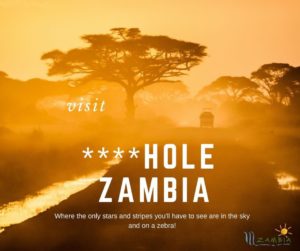 Zambiatourism.com, which operates independently of the official Zambia Tourism Board, also advertised the country as a destination “where beautiful vistas and breathtaking wildlife are our trump card!”

Following reaction to the ad Zambiatourism.com explained, “it is a pure play on the latest comments to come from the U.S… We most certainly do not see our precious country as anything less than spectacular!”

Another commenter was less supportive, writing on Facebook: “This isn’t funny. This is BAD advertising.”

Someone else pointed out: “You forgot about the other stars and stripes we see in Zambia funding half our public utilities,” adding an image of the U.S. Aid logo.

According to the U.S. Aid website, the Sub-Saharan African country is slated to receive as much as $797 million in development assistance, which includes loans made on concessional terms.