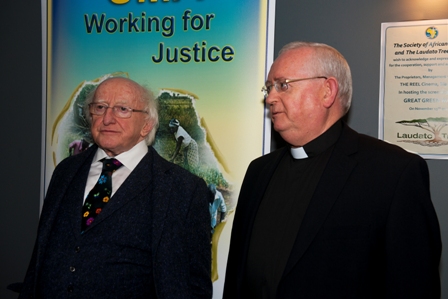 The screening was hosted and sponsored by the Reel Cinema, Blackrock, Cork and we wish to express our sincere thanks to the proprietors, especially Mrs. Mary O’Leary, and the entire staff of the cinema for their support and generosity.

The Great Green Wall documentary film is currently touring international film festivals and recently won the Audience Award at the Sao Paulo Film Festival, Brazil. The film is part funded by Irish Aid. You may view the Trailer of the film below.

The screening was reported by the African Union on its website as well as several Irish newspapers and websites.

After welcoming President Higgins to the cinema, the SMA Provincial Leader, Fr. Malachy Flanagan, introduced the documentary film with the following short address:

“On behalf the Society of African Missions, I wish to welcome Uachtarán na hÉireann, President Michael D. Higgins and his colleagues, to this private screening of the documentary film ‘The Great Green Wall’. We welcome also the Lord Mayor of Cork, John Sheehan. I extend a very special welcome to representatives of the African community living in the Cork area, including those living in Direct Provision as well as everyone else who has come here this evening. Céad Mile Fáilte.

The Laudato Tree Project, inaugurated by President Higgins last year, is inspired by the Encyclical letter of Pope Francis – Laudato Si’ and by Africa’s Great Green Wall, the subject of tonight’s film.

The Laudato Tree Project is a living expression of ‘Laudato Si’ and of our common responsibility for the earth, particularly in Ireland and Africa.  We want to encourage the people of Ireland, especially our youth, to engage in growing biodiversity across the island through the planting of trees. This is an urgent necessity in the fight against Climate Change. Simultaneously, supporters of the Laudato Tree Project will help grow trees along Africa’s Great Green Wall.

This wall was inspired by Thomas Sankara, former President of Burkina Faso and it was to grow a wall of trees and shrubs 8,000 kilometers long and some 15 kilometeres wide, across initially 11 Sahelian countries. Today, over 20 countries are now part of the initiative. To help us do this, we are delighted to partner with the Tree Council of Ireland and with the United Nations Convention to Combat Desertification.

The UN’s Great Green Wall initiative is much more than the planting and growing of trees. It is primarily about people; about caring for their health and wellbeing; about their livelihoods and the environment that sustains them.

Tonight’s film takes us on a journey across the continent of Africa, across the Sahel region, and introduces us to many of the daunting challenges that Africa faces. It is primarily the voice of Africa’s young – a voice of inspirational hope for the future.

Branches from the Great Green Wall will green other degraded regions and will, when completed, be a mosaic crisscrossing the African continent, offering hope to some of the world’s most vulnerable people.

Thank you for being here this evening. After viewing the film we hope that you will support the efforts of the Society of African Missions to grow and develop our Laudato Tree Project – as a very real sign of our commitment to Climate Justice. We invite you to join us in being part of something amazing.

And, with that, I invite you all to sit back and be enthused by a truly amazing and inspirational initiative offered to the world by the people of Africa.